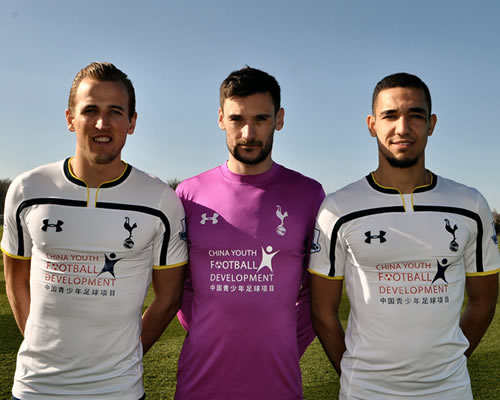 Players will wear special edition match shirts featuring the charity’s logo that will be auctioned off to raise money to help thousands of disadvantaged young people in China gain access to life-changing sporting opportunities via the club and AIA China.

The initiative is part of Tottenham’s long-term partnership with AIA, which is committed to promoting increased sports participation and healthy lifestyles across the Asia-Pacific region.

The AIA China Youth Football Development programme was launched in Shanghai last year with the help of Tottenham Hotspur legends Ledley King and Steffen Freund, and coaches from the club’s academy.

The charity aims to promote the development of youth football across China through coach education, the improvement of sports facilities and the increasing participation in rural areas amongst primary school children.

Legendary former Tottenham Hotspur captain, Ledley King, recently led a football coaching session for underprivileged children from Dulou village in Guangdong province, and two of those participants will be given a once-in-a-lifetime opportunity to lead the teams out onto the pitch as mascots for Saturday’s match.

During their special visit to London, they will also take part in a football coaching session at Tottenham Hotspur’s world class training centre alongside girls of the same age from the Club’s local community, led by the Tottenham Hotspur Foundation and Spurs Ladies, and supported by first team players Christian Eriksen and Nacer Chadli.

Spurs chairman Daniel Levy said: “We are delighted to show our support for a cause that is close to the hearts of our principal partner, AIA, and one which we have been involved with since it launched last year.

“Our global coaching team, along with legends such as Ledley and Steffen, have been instrumental in delivering coach education workshops out in China alongside football sessions for some of the country’s most disadvantaged young people.

“The club, through its award-winning foundation, has a proven track record of using the power of football to create life-changing opportunities for young people within our local community, and we are proud to be able to take this work to a global level in support of the AIA China Youth Football Development programme.”

AIA China CEO John Cai added: “We are proud to partner with Tottenham Hotspur to promote the AIA China Youth Football Development programme to a wider audience outside China.

“Football is the world’s most popular sport and this is certainly the case in China. lt has the power to teach young people not only the value of healthy living, but the value of teamwork and perseverance.”

Tottenham Hotspur foundation, a leader in its field of creating life-changing opportunities for some of society’s most vulnerable groups, also shares ideas and philosophies with AIA to help improve the lives of underprivileged young people across the Far East region.