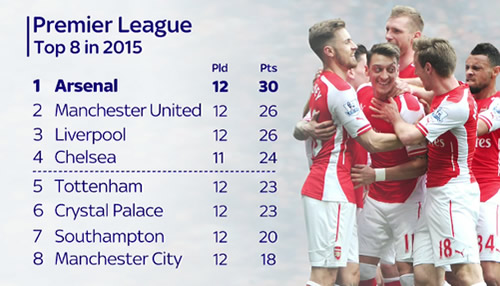 The Premier League table since the turn of the year Photo: Sky Sports News HQ/Twitter

Arsenal are leading the way at the top of the Premier League form table for 2015, followed closely by Manchester United.

The Gunners have been in fine form in recent weeks and continued to impress as they sealed a thumping 4-1 win over Liverpool at Emirates Stadium on Saturday.

That victory lifted Arsene Wenger’s men up to second place in the Premier League table and seven points behind leaders Chelsea heading into the final seven games of the season.

Manchester United, meanwhile, have been in equally impressive form of late.

Louis van Gaal’s men beat Aston Villa 3-1 on Saturday to follow up their 2-1 win over Liverpool at Anfield in their other most recent outing.

The win over Villa at Old Trafford moved the Red Devils up to third place in the Premier League table ahead of this weekend’s derby showdown with Manchester City at Old Trafford.

And if the Premier League table were to be constructed purely from results since the turn of the year, Arsenal would be four points clear of United at the top of the pile.

Current leaders Chelsea would be down in fourth place and six points behind the Gunners.

Gabriel reflects on his first few months at Arsenal