Arsenal fan, 11, travels from New Zealand to be club’s mascot against Liverpool 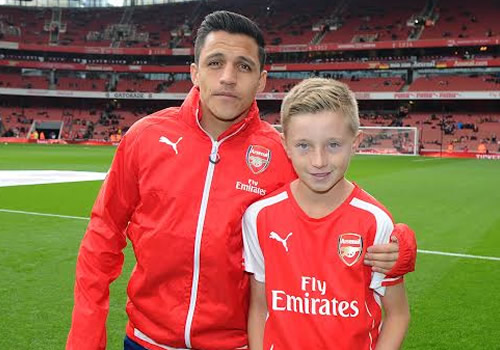 An 11-year-old Arsenal fan travelled from New Zealand to London to lead his favourite team out against Liverpool on Saturday after being chosen as the club’s mascot last weekend.

Jonny Evans was picked at random from over 33,000 ‘Junior Gunners’ to be Arsenal’s mascot for their 4-1 Premier League win over Liverpool on Saturday.

Jonny travelled the furthest of any of our Junior Gunners to date to be able to lead the team out onto the pitch for the kick-off at Emirates Stadium on Saturday. He greeted both the Arsenal and Liverpool players as they arrived, met them in the dressing room and played football with some of them on the pitch ahead of the game.

“It was very cool to see the players in real life, shake their hands and get pictures with them, especially my favourite player Alexis Sanchez,” he said.

On hearing that a Junior Gunner Jonny was travelling all the way from New Zealand to be the team’s mascot, Alex Oxlade-Chamberlain sent him a quick message and challenged him to video his journey at the Emirates. Jonny, with a little help from his parents and Arsenal, did just that.

His father Gareth, a lifelong Arsenal fan, added: “It’s a great experience for Jonny. To be selected at random from so many young fans and have another excuse to come back to the UK and see the family is just amazing. It’s a dream come true.”

Jonny was born in New Zealand shortly after his parents moved to Auckland from the UK in 2003. For his fifth birthday, his grandmother, who still lives in the UK, gave Jonny his first Junior Gunner membership as a present and has renewed it ever since.

In addition to being in with a chance to be a matchday mascot, the Junior Gunners is a great way for children to make new friends. There are a number of great benefits to being a member including access to reduced price tickets for first team matches, as well as various events, competitions and quizzes held throughout the season.