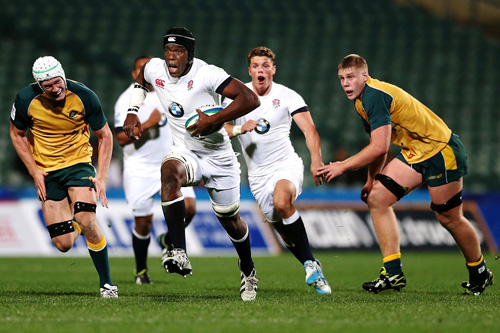 Maro Itoje is seen as a future England star

Saracens lock Maro Itoje has committed his future to Saracens by signing a new long-term contract.

The 20-year old is a highly-rated prospect and was England’s man of the tournament in the U20 Six Nations in 2014 before captaining the side to glory at the Junior World Championships in New Zealand last summer.

Saracens are a great club, who have treated me unbelievably well since I joined at the age of 14. The club feels like home, and I’m really excited to have extended my contract.

The 6ft 5in forward is very much a modern lock, one who can also operate equally effectively at blindside flanker, and widely tipped as a one to watch ahead of the 2019 Rugby World Cup in Japan.

The Londoner made his Saracens debut against Cardiff Blues in the LV=Cup in January 2013, but had to wait until last May to make his first Aviva Premiership start.

His rapid development has already seen him lead the club to LV=Cup and A-League glory this season, and few would back against him becoming a future Red Rose star after making his England Saxons debut against Ireland Wolfhounds in Cork at the end of January.

But, for now, Itoje is focused on breaking into the Saracens first team on a more regular basis and playing in bigger matches.

“Saracens are a great club, who have treated me unbelievably well since I joined at the age of 14.

“The club feels like home, and I’m really excited to have extended my contract.

“The club is incredibly ambitious, and we have been competing at the highest level for some time.

“As a player you want to be playing in the big games and, hopefully, if I can keep improving I will be involved in more and more of them.”

Mark McCall, Saracens’ director of rugby, paid tribute to Itoje, who has been an invaluable leader in the club’s development pathway alongside studying politics at SOAS, part of the University of London.

“Maro’s progress over the last two seasons has been outstanding,” McCall said.

“He’s captained Saracens to the A-League and LV=Cup title’s with great maturity, and he has an incredible desire and hunger to get better as a player.

“What’s even more impressive is he’s managed to combine his progression as a rugby player alongside his studies, in which he is also excelling.

“He’s an incredibly ambitious young man, and we’re delighted to announce he’ll be extending his stay with Saracens.”