Cesar Azpilicueta led the tributes for Eden Hazard after the Belgian playmaker was named the PFA player of the year on Sunday evening.

Azpilicueta was at the glitzy awards ceremony at London’s Grosvenor Hotel on Sunday and took to Instagram to pay tribute to his club team-mate.

The Spaniard uploaded the pictures above onto his Instagram account and wrote: “A great night at the @the_pfa Awards with friends. Congrats to the winners and specially to @hazardeden_10!”

Meanwhile, former Chelsea man Ryan Bertrand also snapped a picture with Hazard and his award after attending the event in central London.

Bertrand shared the picture below and wrote: “Congrats my bro @hazardeden_10” 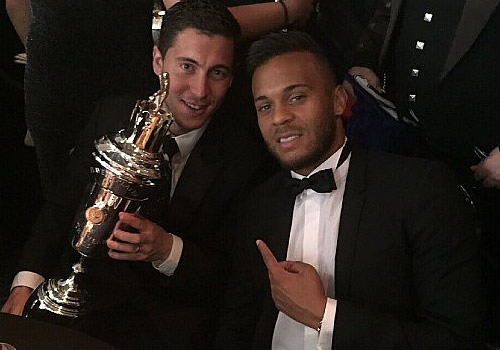 And Chelsea captain John Terry joined in with the congratulations for the former Lille man, as he shared the picture below on his own account and wrote: “Congratulations @hazardeden_10. To be voted by the players you play against all season is a great honour and you fully deserve it. You have been unbelievable and it’s a pleasure to share the pitch with you.
#chelsea #PFA”

Hazard, who joined Chelsea from Lille back in 2012, played the full 90 minutes as the Blues played out a goalless draw with Arsenal on Sunday.