Chelsea and Arsenal stars dominate statistical team of the season 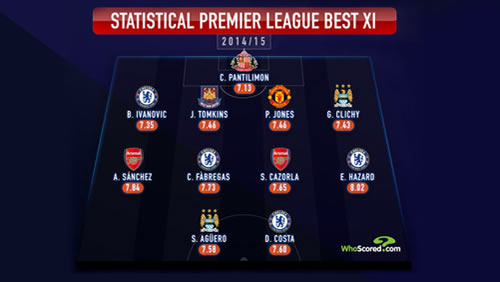 The statistical team of the year, according to WhoScored.com Photo: Sky Sports News HQ/Twitter

Chelsea, Arsenal and Manchester City are the best represented Premier League clubs in the statistical team of the season, according to WhoScored.com stats.

The Blues, who are currently six points clear at the top of the Premier League table with a game in hand over their closest rivals, have four top-performing players in the team.

Sanchez is fifth in the Premier League for goals scored on 13, while Hazard has completed 145 more passes in the final third (844) than any other player in the English top flight.

Sunderland’s Costel Pantilimon is the top-performing goalkeeper, having made more saves per game (4.1) than any other first-choice shot-stopper.