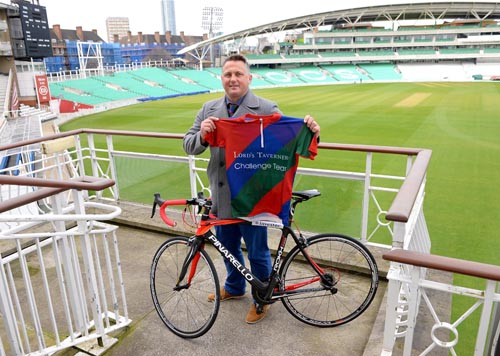 Darren Gough makes no secret that he’ll always be the first man into bat for Kevin Pietersen no matter how sticky the wicket.

England’s ninth most successful wicket taker of all-time is a loyal friend to the controversial batsman and was best man at his wedding.

Pietersen has rejoined Surrey in a last-ditch bid to earn his place in England’s Ashes squad this summer – and all eyes will be on Cardiff for the start of his campaign against Glamorgan in just over a fortnight.

I have huge respect for him for making that call and pulling out of a big money deal in the Indian Premier League to give it a shot, it shows just how much he wants it

But Gough believes there is still only a slim chance of his friend adding to his tally of 104 Test match appearances when England start their Ashes series on the same ground a few months later.

“I would say it’s a pretty small percentage chance of seeing Kevin playing for England again,” said Gough, who is taking part in the second Investec Ashes Cycle Challenge to raise funds for the Lord’s Taverners in July, the UK’s leading youth cricket and disability sports charity, with the inaugural event raising over £280,000 for the Lord’s Taverners and other charities in 2013

“It requires England’s batsman to fail in the West Indies and then again against New Zealand, which is obviously something no England fan wants.

“The new ECB chairman has given Kevin a lifeline and he’s got to make the runs now and put the pressure on.

“Good luck to him, if the others fail and he scores hundred after hundred, which I think he would have to do, the dream might just come true for him but realistically I would say the door is shut.

“If Kevin isn’t selected for the first Test against Australia then he will probably disappear to the Caribbean Premier League and that will be that.

“I have huge respect for him for making that call and pulling out of a big money deal in the Indian Premier League to give it a shot, it shows just how much he wants it.

“If he got to the point where he’s retiring and he didn’t give it that last go, I don’t think he would have been able to deal with that mentally.

“It’s similar to me when I left Essex to go back to Yorkshire, I had unfinished business in Yorkshire and I went back for a couple of years.

“I can live happily ever after on that because I went back and fulfilled what I wanted to achieve and it’s the same for KP.”

Pietersen and current England coach Peter Moores have a fractious relationship but even proud Yorkeshireman Gough believes the former Lancashire coach must be give a bit more time – despite last month’s World Cup horror show.

Moores admits he’s a man under pressure ahead of the three Test series in the Caribbean, which starts in Antigua in just under two weeks.

And it doesn’t get any easier with two Test and five one-day internationals against in-form New Zealand followed by the arrival of Darren Lehman’s Australia in just under 100 days time – a team whose confidence is soaring.

“We’ve got a good coach with England and he knows what he is doing but his personality is more about percentages,” added Gough. “He gets a lot of stick about stats but every team uses stats.”

While England toil this summer Gough has other plans as he competes in the Investec Ashes Cycle Challenge which will raises funds for the Lord’s Taverners charity.

Gough, the first to admit he’s not got the physique for lycra, will lead a cricketing peleton as they cycle between England’s Test match grounds over four days this summer, with the challenge taking place between 12 and 15 July 2015 and will cover over 300 miles between the famous 2005 Ashes venues, with the Kia Oval the finish line in four months’ time.

“I’m okay on a motorbike but a bike is going to be a big challenge,” he said.

“We are hoping to raise enough funds to buy five minibuses that can be used to help disadvantaged and disabled children get into sport.

“I’ve always liked a challenge and when it’s raising money for a wonderful cause you want to get involved.”

To support Goughie’s fundraising efforts please visit lordstaverners.org/ashescycle and keep up with the team’s progress by following @LordsTaverners and @Investecwin – to donate text VELO15 £5 or £10 to 70070

Guinness PRO12: Nick Williams banned for rest of the season