Diego who? Stats prove that Remy is Chelsea’s ideal replacement

Stats from www.oulala.com suggest that Chelsea have the perfect replacement for Diego Costa in the form of Loic Remy 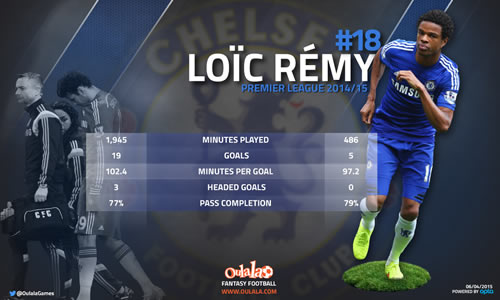 When Diego Costa limped off after 11 minutes into the second half against Stoke City on Saturday with a further complication to his hamstring, it was clear that Chelsea’s top goal-scorer would be spending a further spell on the sidelines.

The goal-scoring responsibilities now fall to Loic Remy, a man that has delivered every time he has been called upon by manager Jose Mourinho this season, including two winners in Chelsea’s last two matches against Stoke and Hull.

To assess whether Remy is fully capable of filling Diego Costa’s boots, www.oulala.com took a more detailed look at both strikers this season and it’s great news for Chelsea fans, the stats prove that Remy is more than able.

The 28-year-old has scored a goal every 97.2 minutes compared to the Spaniard who has taken a little longer, netting each of his every 102.4 minutes.

Costa and Remy have scored 24 Premier League goals between them this season and all 24 have come from inside the box, the forwards displaying a similar approach to goal scoring, keeping it simple.

It’s very clear that the pair are different types of strikers, further emphasised by the fact that none of Remy’s goals have come from his head compared to three from Costa, Chelsea will have to adjust their style of play slightly to get the very best from the Frenchman, keeping it on the ground and adapting to suit his main attribute – pace.

With an exceptional strike-rate this campaign, Remy has now become key to Chelsea’s title push, and he’s capable, more than capable.