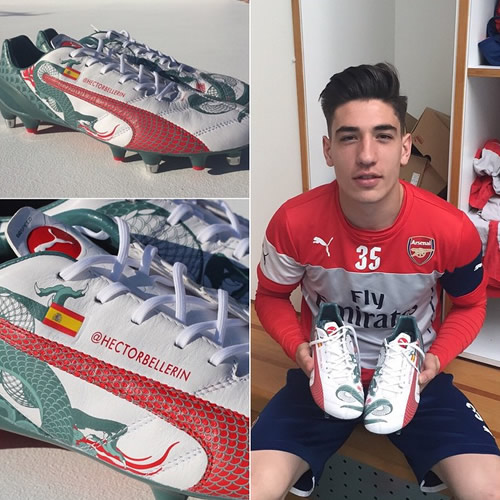 Hector Bellerin took to social media to show off his latest pair of Puma football boots ahead of Arsenal’s Premier League showdown with Chelsea at Emirates Stadium on Sunday.

The Blues head across London 10 points clear at the top of the top-flight table as they look to win their first Premier League title since 2010.

The Spaniard has been in fine form for Arsene Wenger’s side in recent weeks since breaking into the Gunners’ first-team this season.

The 20-year-old has featured in 14 Premier League games so far this term and scored Arsenal’s opener as the Gunners beat Liverpool 4-1 at Emirates Stadium earlier this month.

Arsenal head into Sunday’s clash in fine domestic form, with the Gunners having won their last eight games in the top flight to move up to second place in the Premier League table.

Chelsea’s Jose Mourinho: Arsenal’s Arsene Wenger is not my rival