Liverpool beat Arsenal as most popular team on Twitter in UK

Liverpool may be struggling on the pitch, but the Reds are dominating the UK in terms of Twitter followers

So the world isn’t full of Manchester United fans after all.

A new infographic demonstrating which Premier League clubs are the most popular according to Twitter followers shows that Liverpool in fact have the most fans from the UK on the social network.

You only have to glance at the UK map to see that Liverpool (in green) dominates. There are pockets of red (Manchester United) and yellow (Arsenal), but green is most prevalent, spreading from Merseyside north to Scotland, south towards London and into Wales and Ireland.

There are six Premier League teams in London, but one stands apart from the rest in terms of Twitter followers – Arsenal. Not only do the Gunners have more followers in their own locale of Highbury and Islington, but they also edge out arch-rivals Tottenham and Chelsea in their backyards. Crystal Palace also see their home turned Arsenal yellow, while West Ham and Queens Park Rangers are shaded out by Liverpool green.

The map was created by looking at the official Twitter accounts for each team, using their followers as an indicator of allegiance. You can discover at a glance which teams dominate each country around the world, but also in the UK specifically it is possible to zoom right in to county level to see where loyalties lie at a local level. 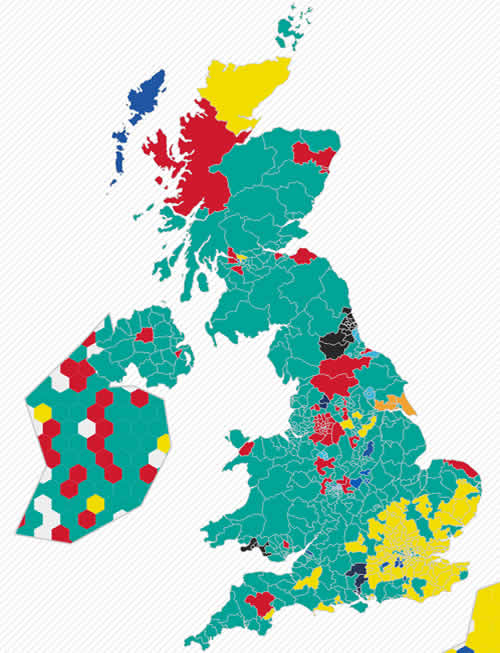 Liverpool (in green) dominate most of the UKPhoto: Twitter

It’s a tale of two London clubs in Europe, with Arsenal generally owning the Northern European countries, while Chelsea presiding in the south. Several of these teams’ biggest stars, past and present, hail from countries that show strong support for their team.

The North America picture is in a way reflective of the Premier League era as a whole. The top four, Arsenal, Chelsea, Manchester United and Liverpool, so frequently occupied these positions in varying orders throughout the Premier League years that their dominance comes as no surprise.

Jamie Carragher: Why summer signings are crucial for Liverpool