After seeing the extraordinary abilities of Van Velzen on his YouTube channel online bookmaker Betfair sought to invite the Dutch teenager to the UK for a once in a lifetime experience, to prank Liverpool star

Betfair organised for the free kick specialist to travel from his home town of Zwolle in Holland to the hallowed turf of Liverpool’s Melwood training ground. 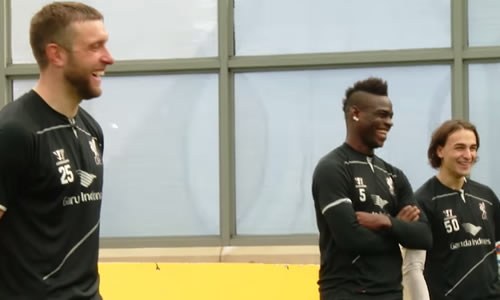 Rickie Lambert, Mario Balotelli and Lazar Markovic were involved in the prankPhoto: Betfair

The talented teenager played the role of a competition winner, who had won the opportunity to meet the stars and receive a free kick masterclass.

He went on to take part in a competition with the players, hitting free kicks from outside the box – both with and without a wall to negotiate.

As soon as Bas turned on the style the surprise was clear to see on the faces of Balotelli and co. Over the course of the two rounds it was obvious they were up against more than just a run of the mill competition winner.

YouTuber Van Velzen said: “The whole experience was amazing, especially meeting Balotelli and getting involved with the other Liverpool players.

“It’s every fan’s dream to play football with their idols and I really enjoyed pretending that I wasn’t very good at free kicks.

“Betfair have been great to make the trip possible and it’s definitely one of the most exciting projects I have been involved with. Seeing the players’ faces when they saw me shoot was also really satisfying!”

Watch Arsenal fans be hypnotised in build-up to Liverpool clash