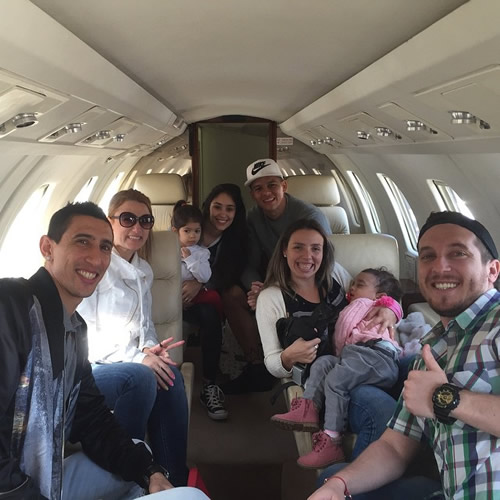 Marcos Rojo and Angel di Maria were all smiles as they jetted off to Lisbon with their families in a private jet on Sunday afternoon.

Rojo and Di Maria both featured for Manchester United as Louis van Gaal’s men maintained their push for Champions League qualification with a 3-1 win over Aston Villa at Old Trafford on Saturday afternoon.

Di Maria came off the bench to set up Wayne Rooney’s goal, while Rojo played the full 90 minutes in the victory over the Villains.

And with United not in action until next weekend’s Manchester derby, Rojo and Di Maria jetted off to Portugal with their families.

Rojo posted the picture above on his Instagram account on Sunday afternoon and wrote: “The Argentina band is going to Lisbon. #travel #break #portugal #manchester #family”

Saturday’s victory left United in third place in the Premier League table and eight points behind leaders Chelsea heading into the final seven games of the season.

United take on local rivals Manchester City in their next Premier League game.