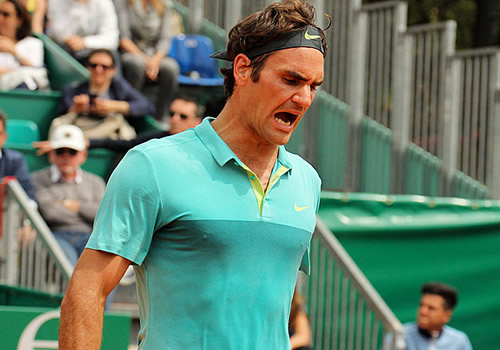 Suddenly, on an overcast and humid day in Monaco, the door was thrown open for a brand new contender to slide their way to the Monte Carlo final.

Two hours after the defending champion Stan Wawrinka hit 41 errors and just four winners on his way to a 6-1, 6-2 defeat by Grigor Dimitrov, Gael Monfils took out the four-time finalist Roger Federer in a powerful and athletic display of baseline tennis.

It means that there is nobody left in the bottom half of the Monte Carlo draw who has reached the final here before. The remaining three finalists in this perfectly-formed Masters tournament all now sit in the top half: Rafael Nadal and David Ferrer in one quarter, Novak Djokovic in the other.

The exit of Federer in particular was a blow of huge proportions for the tournament: The world No2 has been pursued around the grounds like a superstar, and his preparation for the clay season—missing the Miami Masters for an extended training block on the red stuff—proved his determination to make another bid for the title here.

But on paper, this was always going to be a difficult match in what was, from the first, a demanding section of the draw, one in which Federer and Wawrinka could even face one another in the quarter-finals.

Federer had split his last six matches with Monfils and most of them were close affairs. In last year’s dramatic five-set quarter-final at the US Open, Monfils had match-points before losing. Their Shanghai and Cincinnati meetings both went the distance, too, so this was a highly anticipated, high-octane match.

If there were any doubts on Monfils’ side, it was that he only recently came back from injury to play in Miami, and then retired in the fourth round there with a hip problem. Indeed he only came to Monte Carlo at the last minute with a wild card, but if there was any doubting his fitness, his first two matches laid the concerns to rest. He beat Andrey Kuznetsov, 4-6, 6-3, 6-4, before beating Alexandr Dolgopolov, 7-6(5), 7-6(6), in one of the contests of the tournament so far.

But Federer looked impressive in beating Jeremy Chardy in well under and hour , too, and he took a quick lead against Monfils, breaking the Frenchman in the fourth game with an acute chip return that drew the error.

However it became clear that the Frenchman needed a few games to get the long match of the previous day out of his legs. Helped by a double fault from Federer, he broke straight back and made a deft serve-and-drop-volley winner to level the match, 3-3. 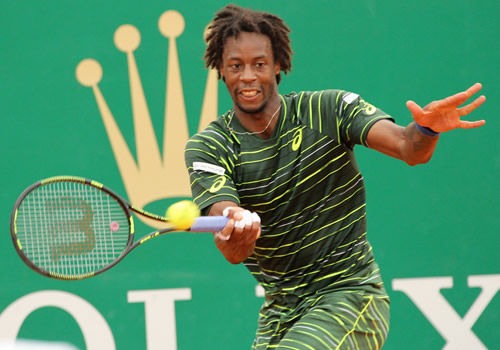 Now Monfils was into his stride—and what a stride it is: He eats up the ground and has remarkable speed. On this occasion, he also showed more consistency and patience than has often been the case. He took on the Federer serve, which was well below the 50 percent mark, and broke again, serving out the set, 6-4.

The Monfils tactics remained firm and clear. He attacked the Federer backhand constantly, and while the Swiss held strong for long periods, he struggled to
resist the pressure.

Deuces came and went on Monfils’ serve, with Federer growing increasingly vocal as he missed chances time and again. In the fourth game, Federer failed to convert a break chance as Monfils directed a big serve to, naturally, the backhand wing.

Now it was Federer’s turn to defend his serve via a multitude of deuces and a couple of break points. Still the Swiss first serve was missing the mark too often, and he was cranking up a dangerous number of errors, 38 of them to just 17 winners.

It was intense stuff, with both absorbing pressure on serve, both working through baseline exchanges, but Federer increasingly forced to defend after too often getting caught at the net by some piercing Monfils returns.

They edged to a tie-break and Federer edge the advantage with a scorching backhand return of serve winner to lead 5-3, only to have Monfils take four points in a row for the set and match, 7-6(5).

It had taken almost an hour and three-quarters, and it took Monfils to his first Monte Carlo quarter-final and Federer to his earliest exit here since falling at the same stage in 2009.

Federer heads back to Switzerland for another training session before playing the inaugural Istanbul Open, where he has the chance to reach the 200th clay-court match-win that was on the line today. On his way, though, he cut a subdued figure, clearly disappointed at his performance.

“I should have done better with the break up in the first. I think I did a good job to hang around the second set. It remained close, but I never felt like things were really happening the way I wanted them to be going during the whole match. The way I felt at 5 3 sort of showed how I really felt, I guess.”

However the ‘glass half full’ Federer surfaced before he left:
“I’m very happy how I worked, how I felt, how my body is, how mentally I feel like I’m in a good place. It’s really my earliest loss besides the Australian Open—I don’t know, probably in a year, since Rome. I’ve had a very consistent run. I’m aware of this. This is not going to put me under too much. I know it’s the first tournament on clay. Of course, I was really hoping to do better because I felt there was an opportunity. Unfortunately, Gael played well today. It was always going to be a tough match.”

Monfils, who now plays Dimitrov for a semi-final place, was naturally delighted—though perhaps not surprised at his success:
“I played well yesterday, and I knew today I had to play at a higher level. I was able to do that, so I’m very happy. I’m surprised I was able to increase my power so quickly. I was able to hit hard from the baseline, to be aggressive: I’m very pleased with that match.

“I am solid and I move well, so I know when I play well on clay, I am difficult to beat. As to Roger in particular, of course I have a precise tactic against him. But three or four times during that match he changed his game and I had to adapt.”

Suffice to say, the Monfils on Monte Carlo’s clay this week has looked something like the thrilling player who, four years ago, was at No7 in the rankings. Much more of this kind of tennis, and he could be back there.