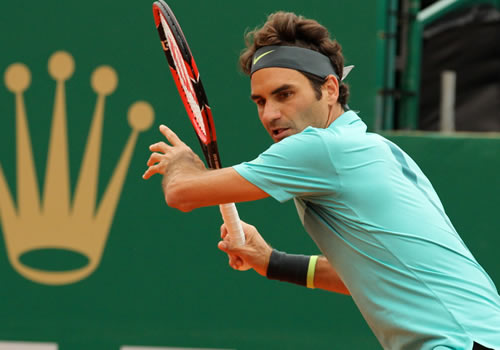 There are not many days in the tennis calendar that feature this sport’s two superstars—which Roger Federer and Rafael Nadal unquestionably are—playing back-to-back matches for the price of one ticket.

That the stage on which they played on this particular day is arguably one of the finest that tennis has to offer just made the Wednesday afternoon ticket at the Monte Carlo Country Club all the more popular.

That they bring such contrasts to bear, such opposing physical presences and styles of play—and get along pretty well, too—has only added to the aura.

For aura is undoubtedly what these two carry with them wherever they appear. Witness the hurly-burly around the stepped corridors that interlace the terraces in Monte Carlo. It is not necessary to see Federer or Nadal edge their way between walls of security guards, it is only necessary to follow the cheers and shouts that follow them.

Such admiration has been hard-won, of course. Between them, they’ve accumulated 31 years on the pro tour, 149 titles, over 1,700 match-wins, 50 Masters titles and 31 Majors. They have both won the Davis Cup, both won Olympic medals, and they both give time and effort to charitable foundations, to the media and to fans.

Not a surprise, then, that each has over 14 million Facebook followers and that, between them, they have 10 million Twitter followers. Nor that they create mini storms at whatever tournaments they play.

Monte Carlo, though, is one of the Masters to elude Federer, largely because Nadal has so dominated on the clay. Here, the Spaniard won eight titles on the bounce, a 50-3 record. Not that Federer’s record in this beautiful venue has been weak. He lost to Nadal in three finals and to Stan Wawrinka in last year’s final, and made a further three quarter-finals in 11 visits.

On this particular afternoon, Wawrinka had thrown down the gauntlet with a 72-minute win over Juan Monaco.

Nadal rose to the challenge by dropping just three games to French wild card Lucas Pouille in 68 minutes. After a confidence-draining few months of injury and earlier-than-usual losses, it was just what the doctor ordered: “I will go back to the hotel with fantastic feeling, because I played probably the best match of the year for me… I played with the right mentality, the right concentration.” 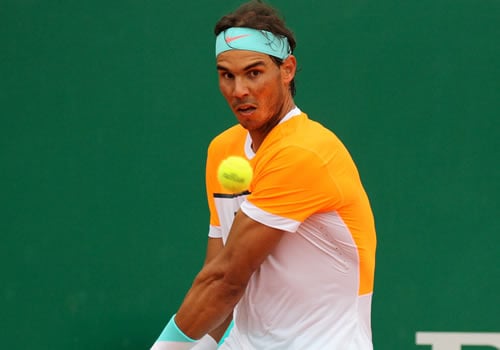 And Federer? Well his match had the potential to be rather more troublesome. He played the No35-ranked Jeremy Chardy, a man he had played three times before, all of them going the full three-set distance.

Their only meeting on clay was in Rome last year, when Chardy came back from a set down to win a final-set tie-break. Would this ring alarm bells? Not a bit of it.

Federer would take just 54 minutes to dispatch a Chardy who seemed to run out of ideas when his pummelling of the Federer backhand failed to draw the openings he wanted. Chardy held his first service game but that was all he managed in the first set. Come the fourth game, and with Federer strong and confident on that single-handed wing, Chardy kept missing the sideline as he went for more with each strike. Federer broke, and then held to love for the second time to lead 4-1 after 14 minutes. After 27 minutes he had the set, 6-2.

If there was a waver from Federer, it was in the third game of the second set. Already with a break, he played an error-strewn game to hand the break back. Memories of Rome last year? He said it crossed his mind, but no more than that: “It might have entered my mind a little bit because it was the only match we’ve ever played against each other on clay.

“But then things were so different there. It was right after the birth of Leo and Lenny, it was unbelievably windy, you almost couldn’t slide anymore because all the sand had gone.

“Yeah, you think for one second, because it would have been 3 0 in the second—it was actually a big game. Instead you’re 2 1. You’re like, really? That’s your reaction when you get broken. After that he maybe gained a little bit of confidence and hit the ball a bit better. So I just tried to break right back, which I was able to do.”

It would take several deuces and some rigorous defence from Federer, but he took back the lead, 3-1, did the same in sixth game, and served out at 6-1. He had made 19 winners to only 12 errors.

His 17th win in 19 matches this year—and his first on clay—earns him rematch with another man not unused to getting the better of Federer. Gael Monfils beat an injury-inhibited Federer with ease in the Davis Cup final—on clay—in December, had match points against the Swiss in the US Open quarter-finals, and beat him in Shanghai in 2013.

The charismatic Frenchman played some superb tennis to beat an on-fire Alexandr Dolgopolov at the end of this glittering day of tennis, in two tie-breaks. Federer afterwards spoke warmly of the popular Monfils: “Gael has capacities that other players don’t have, physically, also because of his power on the forehand and the backhand.

“It is a real challenge to play him. Often the problem is not on your own racket against him… It is always a pleasure to play against him: he’s a nice guy.”

But if Wednesday was a hot day for tennis, with the hottest stars strutting their stuff, it will be knocked into a cocked hat by Thursday’s line-up. It again features Wawrinka, in a battle of that loveliest of shots, the single-handed backhand, against Grigor Dimitrov, followed by the Federer-Monfils blockbuster. Nadal will take on the ever-challenging John Isner and—just to add some extra punch—the world No1 Novak Djokovic will close proceedings against Andreas Haider-Maurer.

Those who stretch their necks may even spot the US Open champion Marin Cilic, the world No5 David Ferrer, No4 seed Milos Raonic and No6 seed Tomas Berdych consigned to Monte-Carlo’s second court. But then this is the first time in the history of Masters tournaments that 15 of the 16 top seeds have reached the last 16 in the draw.

And you can’t argue with star power, even in tennis.