David Ferrer beats Víctor Estrella Burgos, who was forced to retire, to reach the third round of the Monte Carlo Masters 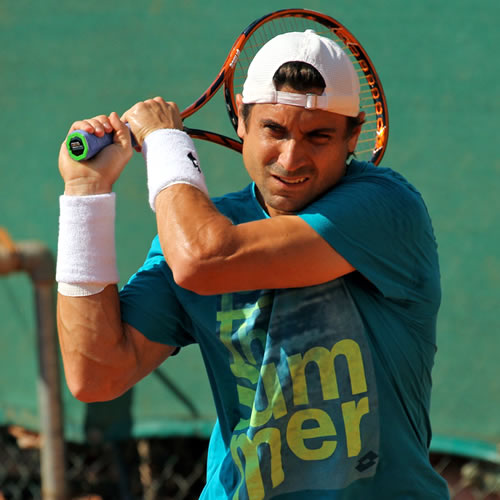 Just before the tour headed to the Mediterranean for the longest clay stretch of the season, the evergreen David Ferrer turned 33. And the ever-ready, blood-on-the court Spaniard had already won three titles, two of them at the 500 level.

It was no easy matter, either: He had to beat No7 seed Tomas Berdych to claim the Doha trophy and No5 Kei Nishikori to win in Acapulco, but he did both in straight sets.

It made the modest, quietly-spoken Ferrer the first player to win back-to-back titles on clay and hard courts since Ivan Lendl in 1985, and not content with that, he made a quarter-final run in Miami before heading to Monte Carlo—where he has two more claims to fame.

Ferrer reached the final here in 2011, when he was beaten by Rafael Nadal, but then last year, on the same court, he beat Nadal for the first time on clay in a decade.

Now playing in his 11th Monte-Carlo Masters, he boasts seven runs to the quarters or beyond here—but then this 5ft 9in Spaniard has reached at least the quarters in nine of his last 11 Masters events.

So while it seemed impertinent to raise the question of his maturing years when he sat to take questions among his elite companions in Monte-Carlo, it also seemed fair to ask whether, with 22 match-wins in the bank and up to No7 in the rankings from No10 just two months ago, he felt fitter than ever.

His answer was unexpected. No, not fitter, he said: “Maybe it’s a year that I have more motivation—and I am enjoying it more than the rest of my career.”

And it shows. After winning in Doha, Ferrer’s first title in almost a year, he raised his arms aloft and threw his head back in joy, before racing to embrace new coach Francisco Fogues and his girlfriend.

He pronounced, “I’m very happy!”, though that was clear. And perhaps it is no coincidence that he seems just as content off court, especially since taking up with Fogues at the end of last year. That appointment came on the back of less than a year with his previous coach, and that word ‘happy’ popped up in Ferrer’s vocabulary then, too:

“Last year when I finished with Javier Piles, my first option was Fogues… Now I am happy because I think he is the best coach I can have.”

That he had decided, after 15 years with Piles, to ring the changes was an impressive statement from one of the most respected players on the tour, because Ferrer had only in the previous year reached a career-high No3 in the rankings. But it spoke eloquently of the Spaniard’s determination to wring still more from his career.

Ferrer first broke into the elite group by reaching the final of the Masters Cup in 2007. In 2010 and 2011, having contemplated retirement when his ranking and confidence slipped from a high of No4 to outside the top 20, he reached the finals of three Masters.

Ferrer grabbed back a top-10 place, ended 2010 at No7 and 2011 at No5, and still was not done. He expanded his game at the front of the court, developed a bigger serve, and continued to become one of the fittest men in tennis. It all heralded the best season of his 12-year career, 2012, when he led the tour with seven titles and 76 match-wins, and won his first ever Masters title in Paris.

In Grand Slams, he also put together his best year, with quarter finishes in Australia and Wimbledon and semi runs in France and the US.

2013 took him to his first Grand Slam final—but like so many others before him, he could not halt Nadal at Roland Garros. Nor could he defend his Paris Masters title in the final against Novak Djokovic, though he did beat Nadal to overtake his compatriot in the rankings for the first time in his career.

By the end of 2014, despite a few struggles with form and back problems, he achieved that rare thing in tennis, becoming the fourth active player to pass the 600 match-wins barrier [now joined by Djokovic], and has launched into 2015 with his passion for playing and winning seemingly undimmed.

As luck would have it, the draw has thrown Ferrer into the clay man-trap of compatriot Nadal and a possible repeat of their quarter-final meeting here last year. He will remember that with considerable satisfaction, but he will also remember that Nadal got his revenge at Roland Garros soon after—and they have not met since.

Beyond Nadal, should lightening strike a second time in Monte-Carlo, Ferrer could face Djokovic in the semis, and all that before any title match—where defending champion Stan Wawrinka, four-time finalist Roger Federer, or No4 seed Milos Raonic could wait.

But Ferrer took his first step this week against another veteran, 34-year-old Victor Estrella Burgos, in a final score-line that was easier than the first four games suggested. Indeed Ferrer went down a quick break against the aggressive single-hander before fighting back strongly in the fourth 13-minute game.

He finally converted his eighth break point to level, 2-2 and held to love after almost half an hour of play. He had also taken his toll on Estrella Burgos, who managed to play five more games, all won by Ferrer, before retiring with a shoulder injury, 6-2, 2-0.

Ferrer next plays Gilles Simon or Benoit Paire, two of a vast array of Frenchmen in the second round. No14 seed Gael Monfils, newly back from injury, beat Andrey Kusnetsov, 4-6, 6-3, 6-4. He next faces Alexandr Dolgopolov.

No11 seed Jo-Wilfried Tsonga, playing only his second tournament this year, had an easier time of it, beating Jan-Lennar Struff, 6-4, 6-4. French wild card, 21-year-old Lucas Pouille, in his debut Monte-Carlo, beat Dominic Thiem, 6-4, 6-4. His next test? Eight-time champion Nadal.

But Ferrer was not the only Spaniard to have a good day. Marcel Granollers—who beat one more Frenchman, Adrian Mannarino—will next play Tommy Robredo, who is also flourishing as he approaches his 33rd birthday after an extended break for leg surgery in 2012.

Along with Feliciano Lopez, also 33 and at a career-high No12 ranking—though not playing here—this trio of Spaniards is not just pushing personal boundaries but still relishing enjoying every minute.