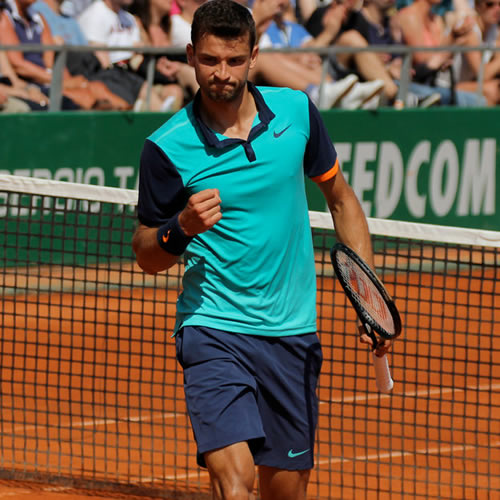 In Monte Carlo, for the first time in the history of the Masters 1000 events, the last 16 boasted all but one of the top-16 seeds, and all were in action on one of starriest schedules of the year.

On Centre Court alone, one after the other, were all the previous champions and the four-time runner-up: First the defending champion Stan Wawrinka, last the 2013 champion Novak Djokovic, and in between Roger Federer and the eight-time titlist Rafael Nadal.

Last year’s finalists, Swiss friends Wawrinka and Federer, were always going to face big questions in what immediately stood out as a demanding section of the draw, one in which the duo could face one another in the quarter-finals.

But before even that, both had to negotiate difficult hurdles. No2 seed Federer would take on the man who had shared their last six matches—and had match-points, too, in the US Open quarter-finals last year—Gael Monfils, back from injury and closing in on a top-10 place again.

Wawrinka, seeded No7, faced the charismatic and elegant No9 seed Grigor Dimitrov in a feast of single-handed backhands. Their only clay meeting, in Madrid in 2013, had gone to Wawrinka in three sets, but their match at Queen’s last year was won by Dimitrov in straightforward fashion, 6-2, 6-4.

And while Wawrinka had opened strongly against the clay-court specialist, Juan Monaco, Dimitrov had proven class on clay, winning the Bucharest title last year and reaching the semis in Rome before going on to win on the grass of Queen’s. Playing in Monte Carlo for only the third time, he had come through a tough opener against Fernando Verdasco and then swept by Fabio Fognini, 6-3, 6-4. What’s more, he made the quarters here in his debut in 2013.

But few would probably have predicted just how one-sided this first match of the day would be. In the blink of an eye, a stunned crowd saw Dimitrov race to a 4-0 lead and, with another break after 25 minutes, take the opening set, 6-1. Wawrinka could not time the ball on either wing and sprayed errors—24 of them—for just two winners.

There were early signs that the Swiss was finding a better groove as the sun came out to warm the court in the second set. He opened with a love hold and pressed Dimitrov in the third game with a couple of deuces, but another forehand hit long and the Bulgarian had survived the challenge.

Come the fourth game, Wawrinka went two break points down courtesy of a shanked backhand, fought back, but conceded the break with a forehand hit long.

He had the chance to break back in the next game but that would be his last opportunity, and with errors still pouring from a despondent Wawrinka, Dimitrov broke again to take set and match, 6-2, in a scant 55 minutes.

The statistics made bleak reading for Wawrinka: 41 errors to four winners, and fewer than half of points won on both his first and second serve. There would be no explanation of this sudden slump in form from the Swiss—he, like Dimitrov, was scheduled to play doubles an hour later.

By then, Dimitrov would perhaps know who he played next, and that too was far from a foregone conclusion, judging from recent encounters. However, the Frenchman had played two gruelling three-setters against first Andrey Kuznetsov and then Alexandr Dolgopolov. This would, then, test whether the wild card as indeed back to full fitness.