After 142 weeks as the world No1, Novak Djokovic is feeling as confident as ever ahead of the Monte-Carlo Masters 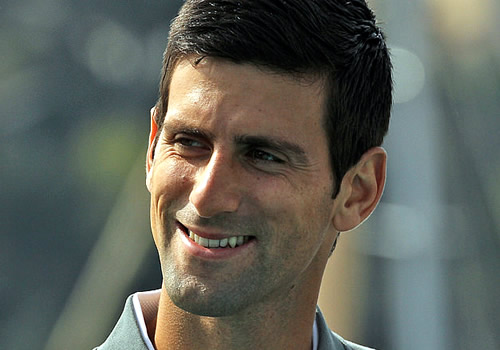 These days, it is not unusual for Novak Djokovic to find himself within striking distance of a new record.

As he sat, a cool, calm and very collected world No1 before the gathered press in Monte-Carlo, he was about to claim his latest milestone: He moved into sixth place in the Open Era list of men who have accumulated the most weeks at the top of the pile. Now enjoying his 142nd week, he has just overtaken Rafael Nadal, but also stands ahead of illustrious greats such as Bjorn Borg and Andre Agassi.

And since the mighty Serb has begun 2015 in some of the best form of his life, and leads the world No2 Roger Federer by 4,310 points, he is set to notch up many more this year.

Should he win the Monte-Carlo title, however, there are still more records at Djokovic’s disposal during his stay at his ‘home tournament’—the Serb lives within walking distance of the MCCC.

He could move equal second with Federer on 23 Masters titles. He could become the first man to win the first three Masters of the year back-to-back: Indian Wells, Miami and Monte-Carlo. He could also put together that rare thing, a four-Master run, since he also closed 2014 with the Paris crown.

And there is every reason to believe he could achieve all those milestones, for while the ‘king of clay’ Nadal has won the Monte-Carlo title eight times—as well as Barcelona eight times, Rome seven times and Roland Garros nine times—it is not the Spaniard who has arrived with all the confidence this year.

In fact, Nadal has not won the title here for the last two years, and it was the Serb who brought his extraordinary run to an end in 2013. Djokovic also beat Nadal in the Rome final in 2011 and last year. Come the big one, though, the French Open, Nadal denied Djokovic in the final, but this year the Serb has clearly set his eyes and his heart on claiming the only Major still to elude him.

The difference, this time around, may have little to do with physical fitness and everything to do with the quality that Nadal is lacking but Djokovic has in spades: confidence.

For Nadal, after an injury-blighted six months at the end of 2014, has yet to regain his full powers and yet to fully believe in himself, as he made clear after his defeat in Miami last week:
“I’m still playing with too much nerves for a lot of moments, in important moments, still playing a little bit anxious… But I gonna fix it. I don’t know if in one week, in six months, or in one year, but I gonna do it.”

Thus far, Nadal has won a single 250 tournament, on South American clay, while the outstanding player of the year so far, Djokovic, has the Australian Open trophy well as the two biggest Masters titles on tour already in the locker. Indeed so well is Djokovic playing, so far ahead of the competition is he in the rankings, that it is hard to avoid comparisons with his stunning 2011 season.

Back then, he won 10 titles—among them three Grand Slams and five Masters—from 11 finals, a 70-6 run. It became the year that began his haul of weeks at No1. Since then, he has compiled a 305-39, won seven Grand Slams, finished runner-up in another five, and three times ended the year as No1.

Not surprisingly, Djokovic was asked for his own appraisal of his current form compared with that heady 2011.

“Next to 2011, this is definitely the best start I’ve ever had… Now it’s clay court season, completely different from hard court. But this is the surface I grew up on, spent most of my childhood days playing on clay.

“I am at my home base, so do feel very comfortable and excited to play in Monaco, where I think I’ve played consistently well throughout many years… at least reaching semi-finals in last couple of years.”

No-one corrected him, but in fact Djokovic has reached the semis or better in his last six appearances… but he continued.

“I am aware there is not much time—one week less than last year between final of Miami and start of Monte Carlo, which doesn’t give me too much time to recover—but I am still feeling pretty OK. I am mentally so motivated and inspired to play tennis here, and hopefully my body and mind will be able to survive to the later stages of the week.”

Reading between the lines, though, it was possible to detect a still-growing confidence.

“The experience of playing at a high level for the last three or four years helped me to handle these particular situations better than I have done. 2011 was the first year that I have done so well.

“Before that I was No3 but I never won that many matches in a row. Now with more experience and more matches under my belt and more hours in the legs, I feel like I have matured physically as well. In general, looking from the mental, physical, emotional point of view, I am at the peak of my abilities right now, so I don’t necessarily need to drain myself of every drop of energy.”

Confidence is such a tricky thing to gain. It takes a lot of time, a lot of matches

For in past years, his traditionally strong hard-court opening has taken its toll.

“The most important things at the beginning of the clay season is to stay injury free because that wasn’t the case the last three years, with a twisted ankle, with a shoulder three years ago, last year was the wrist that kept me away from Madrid. So I didn’t feel that great up to Roland Garros.”

And so to that clay climax in Paris, and of defending champion Nadal. Again, that word ‘confidence’ was to the fore.

“Even though he has struggled with injuries and lack of confidence and matches, and maybe hasn’t won a big tournament since the middle of last year, it’s Nadal and this is his surface.

“As a professional athlete you go through various emotions throughout your career, it is normal to go through ups and downs, or certain crisis moments, periods of the year where you don’t feel as confident, where you are not able to turn big matches in your favour because you get tight, the expectation get the better of you.

“At the end of the day, you are talking about somebody that has won so much in his life, has the experience, the talent, potential, the strength, mental and physical, the complete player, one of the best who has ever to play the game.

“I went through those periods, lost couple of finals in a row in Grand Slams. Then I had a great 2014 and now 2015, so the tables turn all the time. We are human… you lose a match and doubt yourself. It’s important to reflect on it… and get stronger. And [Nadal] he has proven that so many times. That is one of his virtues.

“Confidence is such a tricky thing to gain. It takes a lot of time, a lot of matches, a lot of self-belief, lot of hours on the court, but it’s so easy to lose it. I try to be very disciplined and very aware that I need to keep on working, and hopefully this kind of mindset will allow me to stay on the right track.”

Hearing him talk, seeing him play, that track could well carry Djokovic to the title here and his next set of milestones—and perhaps further down the road, to the big one: the French Open. It may all come down to confidence—his and Nadal’s.