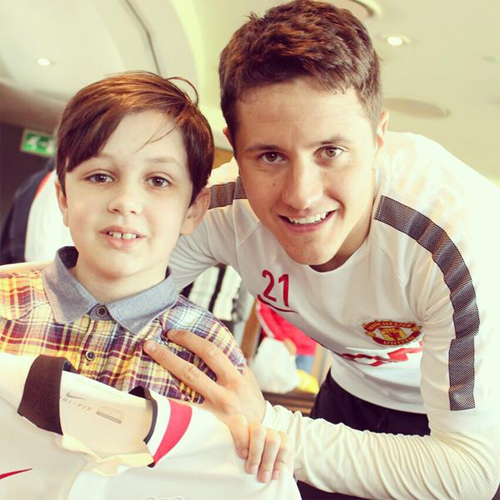 Ander Herrera looked to forget Manchester United’s disappointing defeat at Stamford Bridge at the weekend by spending time with some young Red Devils fans on Monday.

The Spanish midfielder was unable to help United avoid a 1-0 defeat by the Premier League leaders on Saturday evening, which ended their six-game winning run in the English top-flight.

However, Herrera managed to crack a smile on Monday afternoon as the 24-year-old posed with a young Red Devils fan for a photo during his time with the Manchester United Foundation.

The midfielder initially struggled to hold down a regular starting spot in Louis van Gaal’s first-team despite his big-money transfer.

However, Herrera has enjoyed a run of games in the starting line-up in recent weeks, scoring two goals and making one assist in his last four appearances.