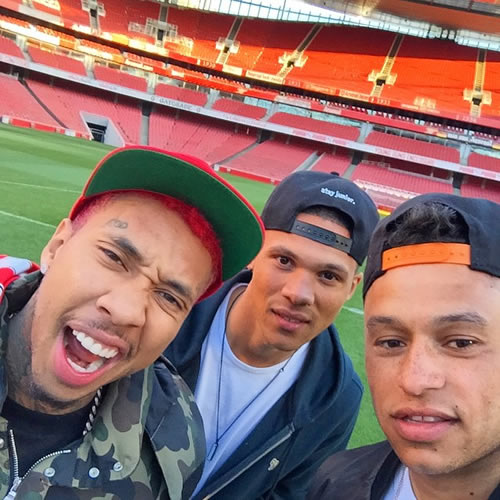 Alex Oxlade-Chamberlain and Kieran Gibbs were all smiles as they snapped a selfie with American rapper Tyga at Emirates Stadium on Wednesday.

The Arsenal duo caught up with 25-year-old in north London as they enjoyed some downtime after Sunday’s goalless draw with Chelsea in the Premier League.

Oxlade-Chamberlain uploaded the picture above of the trio onto his Instagram account on Wednesday evening and wrote:

Meanwhile, Tyga himself was presented with an Arsenal shirt featuring the number 52 and the name ‘Kingin’.

The rapper shared the picture below on Instagram and wrote: “Shout out to @kierangibbs @alexoxchamberlain @arsenal.”

Arsenal return to Premier League action when they take on Hull City at the KC Stadium on Monday night. The Gunners are currently third in the Premier League table but can move above Manchester City and into second if they win their game in hand.

The north London side take on Aston Villa in the FA Cup final next month.

Piers Morgan explains why Arsenal are more boring than Chelsea