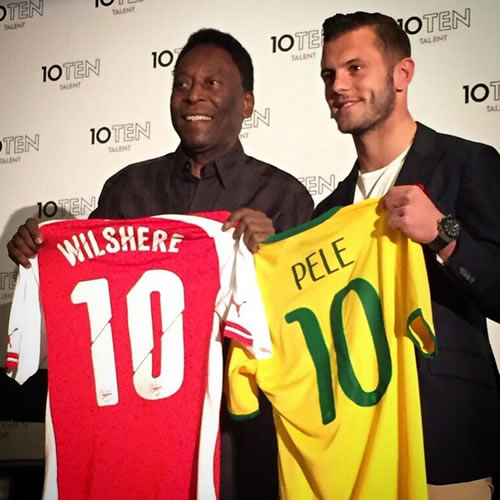 Jack Wilshere was all smiles as he swapped shirts with footballing icon Pele at the launch of new sports agency 10Ten Talent.

The Arsenal midfielder recently joined the agency, of which Pele is a partner, and looked delighted to line up next to the 74-year-old.

Wilshere posted the picture above on his Instagram account and wrote: “Swapping shirts with Pele at the launch of @10TenTalent”

10Ten Talent has been formed by Terry Byrne, a former personal manager of David Beckham.

Wilshere has not played for Arsenal’s first-team since damaging ankle ligaments during the loss to Manchester United back at the end of November.

However, after making his recovery from another minor ankle operation earlier this year, he is now closing in on a return to first-team action.

He could be involved when Arsenal take on Chelsea at Emirates Stadium on Sunday afternoon. The Gunners head into the clash with the London rivals second in the Premier League table and 10 points behind Jose Mourinho’s leaders.