Photo: Arsenal star Mesut Ozil puts his feet up with his dog 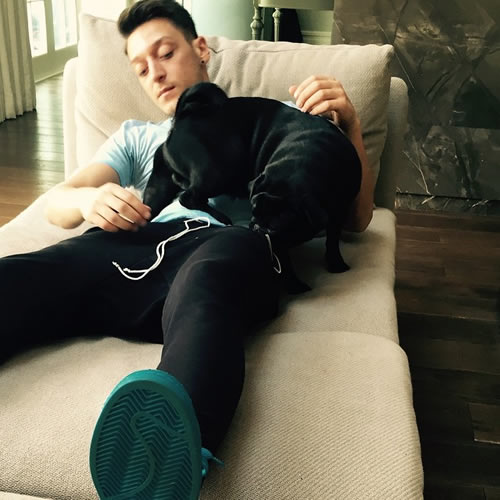 Mesut Ozil enjoyed some downtime at home on Wednesday afternoon as he and his Arsenal team-mates begin their preparations for Saturday’s Premier League clash with Liverpool at Emirates Stadium.

The playmaker was on international duty with Germany this week but has now returned to the capital as Arsene Wenger’s men look for a victory to move nine points clear of Brendan Rodgers’ men.

Ozil posted the picture above of himself at home with his dog and wrote: “Home sweet home”.

Arsenal are currently third in the Premier League table and just a point behind second-placed defending champions Manchester City.

The 26-year-old has been in good form for the Gunners since the turn of the year. He has scored three goals and made five assists in 14 Premier League games for Arsene Wenger’s men.

He missed a large portion of the first half of the season due to a knee injury but returned to action against Stoke on 11 January.