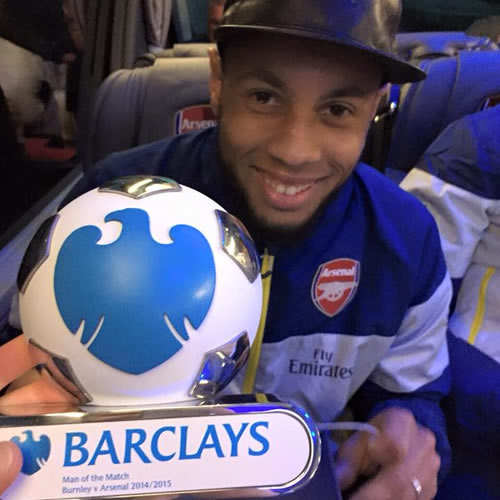 Francis Coquelin was all smiles as he posed for a picture with his man-of-the-match award after helping Arsenal secure a 1-0 win at Burnley on Saturday.

The French midfielder was the Gunners’ standout performer at Turf Moor as Aaron Ramsey’s first-half goal handed Arsene Wenger’s men their eighth straight win and kept them in second place in the Premier League table.

Striker Olivier Giroud posted the picture above of Coquelin with his trophy on the team bus on his official Facebook page after the game and wrote: “Man of the match! Congrats.”

Coquelin has been in fine form for Arsenal in recent weeks after making the midfield holding role his own.

The midfielder has made 17 Premier League appearances for the north London side so far this season since returning from his loan spell at Charlton Athletic.

Arsenal are next in action when they take on Reading in the FA Cup semi-finals on Saturday.

Gary Neville: Why things are looking up for Man United