Alex Oxlade-Chamberlain appeared to be in a relaxed mood on Sunday afternoon... 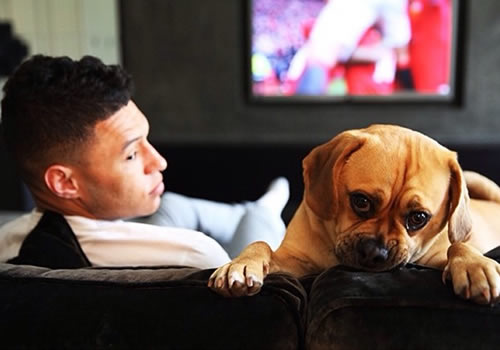 Alex Oxlade-Chamberlain appeared to be in a relaxed mood on Sunday afternoon as he put his feet up at home to watch the football.

And the England international uploaded the picture above onto his Instagram account, of himself with his dog on Sunday afternoon, and wrote: “Super Sunday.”

Oxlade-Chamberlain is currently sidelined with a groin problem after missing Arsenal’s last few games with a hamstring injury.

The midfielder has not featured for the north London club since 9 March due to a hamstring injury and Gunners boss Arsene Wenger last week revealed that the 21-year-old is now suffering from an inflammation of his groin.

Oxlade-Chamberlain has been limited to 17 Premier League starts for the north London club this season and has struggled with groin and hamstring issues throughout the campaign.

Arsenal take on Reading in the FA Cup semi-finals on Saturday.