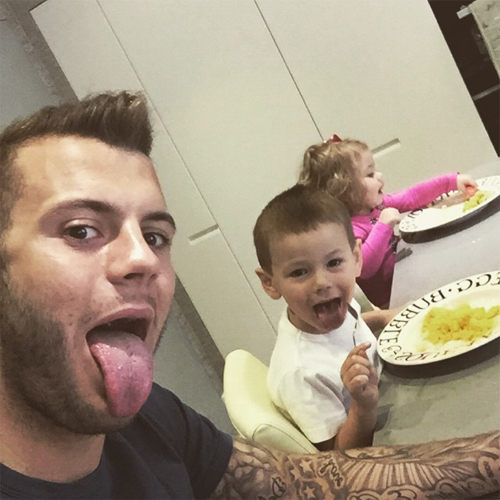 Jack Wilshere may be a Premier League footballer, but the Arsenal midfielder still faces the same challenges as any young parent.

The 23-year-old has been spending quality time with his three-year-old son Archie and one-year-old daughter Deliah during his injury lay-off.

And the England international took to Instagram on Monday morning to give his followers an insight into the entertaining breakfasts in the Wilshere household.

Wilshere posted the above photo and wrote: “Breakfast is always amusing with my babes”

The Arsenal midfielder is nearing a return to action after he completed 88 minutes for the north Londoner’s Under-21 side last week.

Wilshere hasn’t featured for the FA Cup finalists since a 2-1 defeat by Manchester United at The Emirates in November after he injured his ankle.

The England star has scored one goal and has made one assist in 12 appearances in all competitions for the Gunners this season.

MORE: Wilshere happy to get more game time under his belt

Wilshere’s only goal came in a 2-2 draw with Manchester City at The Emirates in September.

Luke Shaw: Why I’m sure I will be a success at Man United