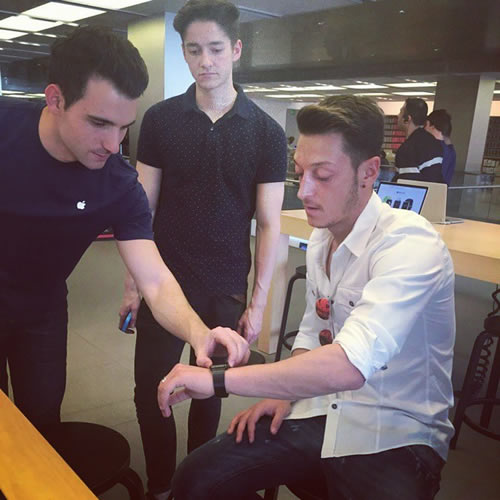 Mesut Ozil took to social media on Thursday to reveal his excitement at trying out a new Apple Watch.

The Arsenal playmaker looked thrilled with his new gadget as he gave the new wearable technology a go at an Apple store this week.

And Ozil used his Instagram account to reveal his delight at picking up his new toy on Thursday, as he shared the picture above on the photo-sharing app.

Ozil wrote: “Excited about my new cool gadget! It’s just like Michael Knight’s watch, but a real one #knightrider #phone”

The 26-year-old World Cup winner will be expecting to feature when Arsenal host Chelsea at Emirates Stadium on Sunday afternoon. The Blues head into the game 10 points clear of their London rivals.

Arsenal are in fine domestic form, however. The Gunners have won their last eight games in a row to move up to second place in the top-flight table.

Is this Arsenal man key to Wenger breaking the Mourinho jinx?

Eden Hazard will be as good as Lionel Messi, says Chelsea star