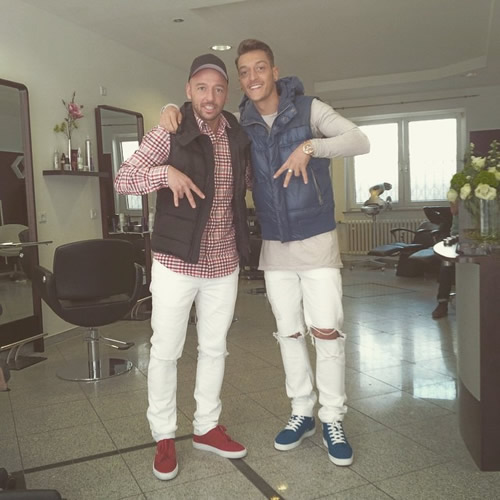 Mesut Ozil headed to Stuttgart on Monday to see his cousin after helping Arsenal reach the FA Cup final this weekend.

The Germany international was all smiles as he posed for a picture with his cousin Serdar after the Gunners’ cup triumph at Two Cut hairdressers in Stuttgart.

Ozil posted the picture above on his Instagram account on Monday afternoon and wrote: “Cousin @serdar_oezil and I… #özil #ozil #stuttgart #ulvigül #hairdresser”

Two goals from Alexis Sanchez handed the north London side victory and set up a clash with Aston Villa next month after Tim Sherwood’s men beat Liverpool 2-1 on Sunday.

Ozil has scored four goals and made five assists 16 Premier League games for Arsenal so far this season.

The World Cup winner will be expecting to feature when Arsenal host Chelsea at Emirates Stadium on Sunday in their next Premier League game.

Tony Gale: Why Chelsea should play Eden Hazard in the centre