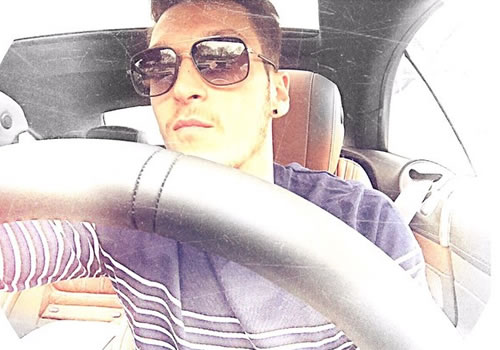 Mesut Ozil looked a happy man as the Arsenal midfielder headed out to visit some of his family in the London sunshine on Tuesday.

Temperatures in the sunny capital topped 23 degrees Celsius and Ozil appeared to be in good spirits during the afternoon.

The Arsenal playmaker uploaded the selfie above of himself heading out for a drive on his Instagram account and wrote: “On my way to pay a quick visit to my family… #happy #love #FamilyTime #ozil #özil.”

Ozil played the full 90 minutes as Arsene Wenger’s men sealed a narrow 1-0 victory at Burnley on Saturday thanks to Aaron Ramsey’s early goal.

The 26-year-old has been in good form for Arsenal in recent weeks, having scored four goals and made five assists in 16 Premier League games this term.

He will be expecting to feature when Arsenal take on Reading in the semi-finals of the FA Cup on Saturday.