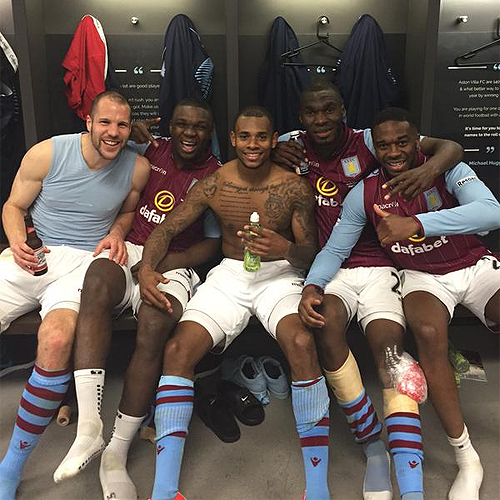 Charles N’Zogbia wasted no time in orchestrating a triumphant dressing room snap after Aston Villa edged to a 2-1 victory over Liverpool in the FA Cup semi-final.

Tim Sherwood’s side came from behind to reach their first FA Cup final since 2000 when the Birmingham side lost to Chelsea after Roberto Di Matteo’s memorable winner at old Wembley.

And N’Zogbia was clearly delighted to reach his first FA Cup final as the Villa midfielder took to Twitter to post a dressing room snap with Ron Vlaar, Benteke, Jores Okore and Leandro Bacuna.

The Reds appeared to be heading towards the final after Brazil international Philippe Coutinho broke the deadlock in the first half with his sixth goal of the season.

The Villa captain proved the match-winner in the second half after Republic of Ireland Under-21 international Grealish teed up Delph, who guided his finish past the Liverpool goalkeeper.