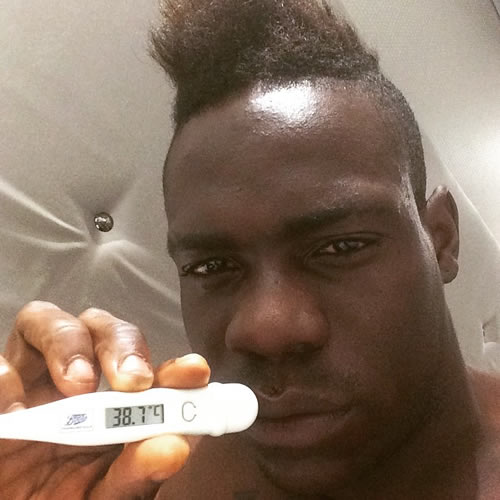 Mario Balotelli took to social media on Wednesday evening to reveal that he sat out Liverpool’s FA Cup win over Blackburn Rovers due to illness.

The Italy striker sat out Saturday’s 4-1 loss to Arsenal at Emirates Stadium and was again unavailable as Philippe Coutinho’s second-half winner set up a semi-final clash with Aston Villa later this month.

And Balotelli was quick to use his Instagram account to post a picture of himself with a thermometer reading 38.7 degrees Celsius after watching Brendan Rodgers’ men secure victory at Ewood Park.

Balotelli uploaded the picture above onto his photo-sharing app and wrote: “@phil.coutinho magic boy! Grande! Nothing stop me to watch my team winning❤️. ( at least this time you know the real reason why I am out) . MISS THE PICTH SO MUCH… #unluckyseason #YNWA #illbeback”

The forward has found his first-team opportunities at Liverpool limited since his £16m transfer to Anfield from AC Milan last summer.

The 24-year-old has only made 14 Premier League appearances for the Merseyside outfit and has only managed one goal in 800 minutes of top-flight football.

He will be hoping to feature when Liverpool host Newcastle next Monday.