Cesc Fabregas and John Terry were all smiles with Chelsea new-boy Juan Cuadrado on Tuesday... 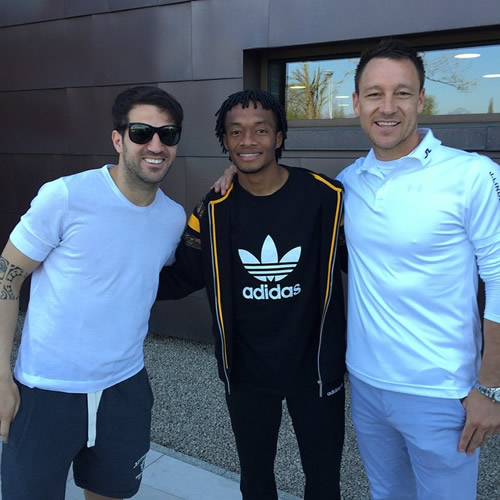 Cesc Fabregas and John Terry were all smiles as they posed for a picture with Chelsea new-boy Juan Cuadrado after training on Tuesday afternoon.

The trio were in understandably good spirits after Saturday’s 1-0 win over Manchester United at Stamford Bridge took the Blues to within two victories of securing their first Premier League title since 2010.

And the three Chelsea stars looked to be in good spirits after a session in the April sunshine at Chelsea’s Cobham training ground.

Terry, who was planning to head on his way for a round of golf, posted the picture above on his Instagram account and wrote: “With the boys @cescf4bregas and @cuadrado after training today. Beautiful day and off to the driving range for me.”

The Chelsea trio will be hoping to feature when the Blues travel to Arsenal for their next Premier League game on Sunday afternoon.

The Blues head into Sunday’s clash at Emirates Stadium 10 points clear at the top of the Premier League table as they close in on winning the top-flight title.

Michael Owen: Arsenal look like having a very good season