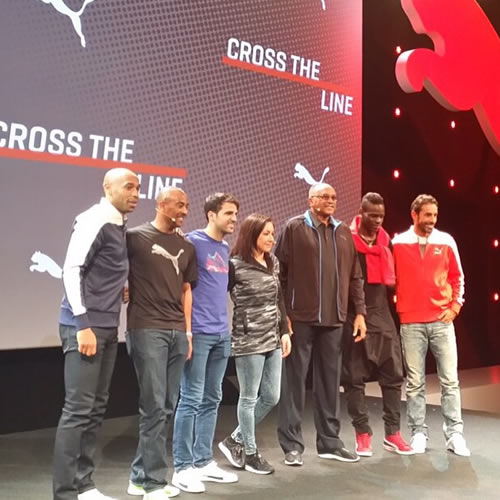 Cesc Fabregas was all smiles as he posed for a picture with Thierry Henry, Robert Pires and Mario Balotelli this week.

The Chelsea midfielder was pictured with the trio at a Puma event in Germany on Monday and was also joined by track and field legends Colin Jackson and Tommie Smith, plus footballer Nadine Kessler.

Fabregas looked in good spirits as he posed for a snap with the Arsenal legends, just days before the Spaniard is set to make his return to Emirates Stadium when Chelsea travel across London to face Arsene Wenger’s men on Sunday afternoon.

Fabregas posted the picture above of the event on his Instagram account and wrote: “Great time last night in Núremberg with some of the puma family.

The 27-year-old playmaker has been in fine form for Chelsea since his transfer to Stamford Bridge from Barcelona last summer. He has made 16 assists and scored three goals in 29 Premier League games for the Blues so far this term.

Chelsea are currently 10 points clear at the top of the table.