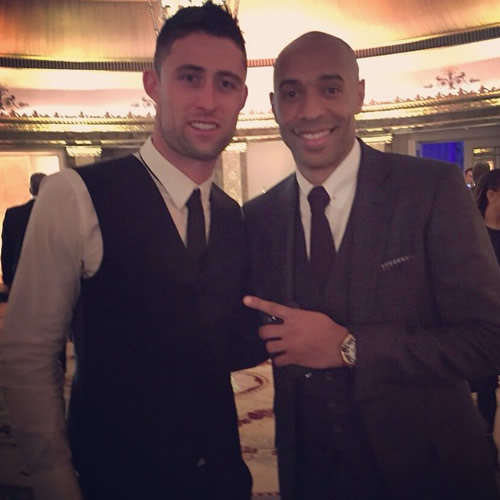 Gary Cahill was all smiles as he posed for a picture with Arsenal legend Thierry Henry at the Didier Drogba Foundation Charity Ball on Saturday night.

Cahill was joined by a host of footballing stars at the glitzy event at London’s Dorcester hotel after the defender played the full 90 minutes to help Chelsea beat Manchester United and take a big step towards winning the Premier League title.

And England international Cahill was clearly delighted to catch up with former Gunners striker Henry on Saturday night.

He posted the picture above on his Instagram account and wrote: “With Thierry Henry last night at the Didier Drogba Foundation Ball #legend #DDF2015 #charity @didierdrogba”

The event, which raised money for the Didier Drogba Foundation and its work in Africa, was attended by the likes of Edgar Davids, Eden Hazard, John Terry and Louis Saha.

Chelsea, who face Arsenal at The Emirates next weekend, now just need two more wins from their remaining six games to win their first Premier League title since 2010.