Cesc Fabregas soaked up the sunshine in London on Tuesday afternoon... 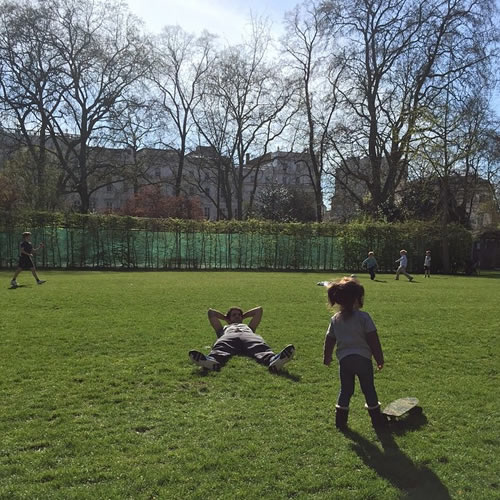 Cesc Fabregas enjoyed a well-earned break from the intensity of the Premier League by soaking up some of the London sunshine on Tuesday afternoon.

The Chelsea midfielder scored his side’s crucial winner as the Blues sealed a dramatic 1-0 victory at Queens Park Rangers on Sunday.

That victory kept the west London side seven points clear at the top of the Premier League table and took them a step closer towards winning their first top-flight title since 2010.

And the 27-year-old made the most of some downtime on Tuesday afternoon as he relaxed in the park with his daughter as temperatures in London topped 24 degrees Celsius.

Fabregas has been in good form for Chelsea since his £27m transfer to Stamford Bridge from Barcelona last summer. He has scored three goals and made 16 assists in 28 Premier League games so far this season.

Photo: Man United’s Ander Herrera puts his feet up in the sunshine

Photo: Arsenal’s Alexis Sanchez soaks up the sunshine with his dogs