Photo: Chelsea’s Oscar guzzles on a bottle of M&Ms 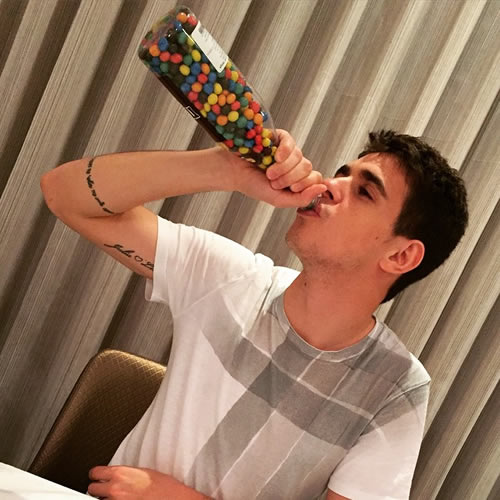 Oscar appeared to be enjoying himself on Wednesday night as he enjoyed a bottle of M&Ms ahead of Chelsea’s clash with Stoke City in the Premier League on Saturday evening.

The 23-year-old Brazilian playmaker and his Chelsea team-mates are gearing up for Saturday’s clash with the Potters at Stamford Bridge as they look to keep their six-point lead at the top of the Premier League table.

And with elite footballers urged to stay away from alcohol for fitness reasons, Oscar enjoyed a drink of the sugary snacks as an alternative.

The Brazil international uploaded the picture above onto his Instagram account on Wednesday and wrote: “Drinking in moderation #sqn #M&M’s”

Chelsea are currently six points clear at the top of the Premier League table and have also played a game less than their closest rivals.

Oscar has scored six goals and made seven assists in 24 Premier League games for Jose Mourinho’s men so far this season.