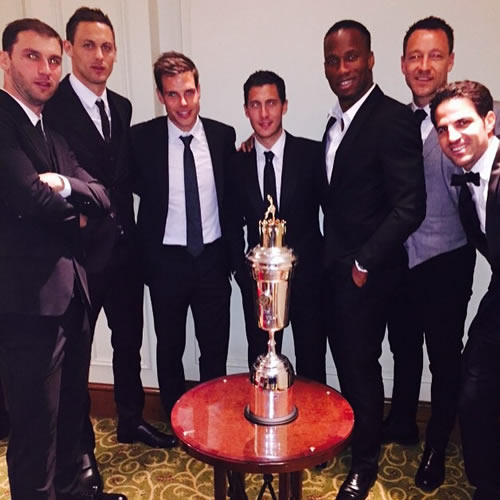 Eden Hazard was all smiles with a handful of his Chelsea team-mates after picking up his PFA player of the year award on Sunday night.

The Belgian playmaker won the accolade at a glitzy ceremony after scoring 13 goals and making eight assists in 33 Premier League games to help leaders Chelsea to within touching distance of the title.

Drogba posted the photo above on his Instagram account on Sunday night and sent his best wishes to the 24-year-old, writing: “Leaving the venue with the best player of the @premierleague: @hazardeden_10 Well done mate!!!!”

Hazard, who won last season’s PFA young player of the year award, was handed the prize at the Grosvenor Hotel in London on Sunday after Chelsea’s goalless draw with Arsenal at Emirates Stadium.

Hazard, who joined Chelsea from Lille back in 2012, played the full 90 minutes in north London against the Gunners.