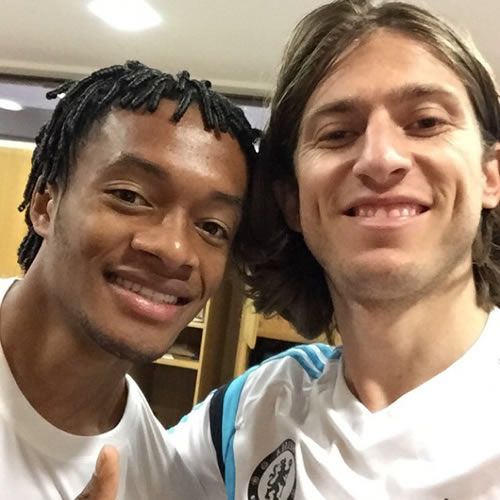 Filipe Luis was all smiles with Juan Cuadrado after Chelsea training on Wednesday as Jose Mourinho’s men prepare for their clash with Queens Park Rangers this weekend.

Cuadrado has made five Premier League appearances for the Blues since joining the west London club from Fiorentina back in the January transfer window.

And the 29-year-old Luis found time for a quick snap with the Colombia international at Chelsea’s Cobham training ground on Wednesday.

Luis has been a regular fixture in Mourinho’s first team this season as the Blues continue their charge towards their first Premier League title this season.

The Brazilian defender has made 16 appearances in all competitions for the Blues.

Chelsea moved seven points clear of second-placed Arsenal at the top of the Premier League table on Saturday thanks to a 2-1 win over Stoke City at Stamford Bridge.