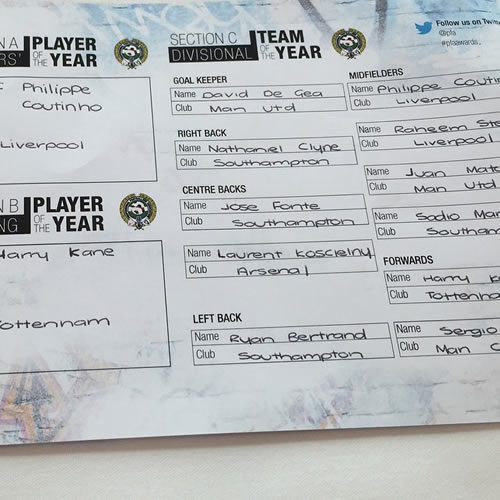 John Terry took to social media on Friday afternoon to reveal that he has picked Harry Kane as the Premier League’s top young performer as he cast his vote for the PFA player of the year award.

The Chelsea captain, who chose Liverpool starlet Philippe Coutinho as his senior player of the season, posted the picture above of his voting card on his Instagram account.

Terry also revealed some of his picks for the PFA team of the year.

The likes of David De Gea, Laurent Koscielny and Juan Mata all featured in the Chelsea skipper’s ideal 11 based on performances in the Premier League this season.

Kane is the early favourite for the young PFA prize after having scored 19 goals and made three assists for Tottenham Hotspur in 27 games for the north London club this season.

Coutinho, meanwhile, has netted four goals and made four assists in 28 games for Liverpool so far this term.

Photo: Arsenal’s Mesut Ozil reveals the key to his happiness