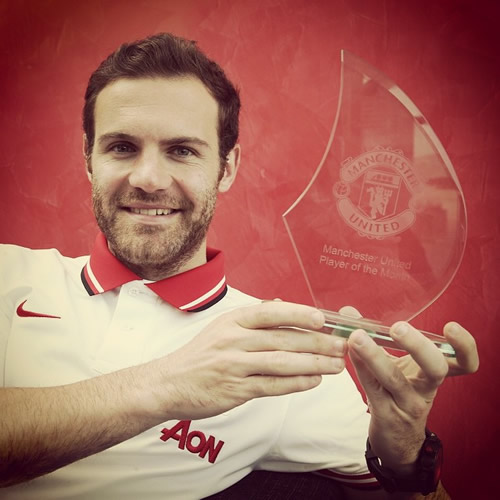 Juan Mata took to social media on Thursday afternoon to post a picture of himself with his Manchester United player of the month award for March.

The Spanish playmaker scooped the prize after a string of impressive displays for Louis van Gaal’s side, including his brace in the 2-1 win at Liverpool.

Mata uploaded the picture above of himself with the trophy and wrote: “Thanks!! @ManchesterUnited”

Mata was named the player of the month for March last week with 51 per cent of the vote ahead of Marouane Fellaini and Wayne Rooney.

Mata has been in good form for the Red Devils so far this season, with the 26-year-old having netted seven goals and made three assists in 25 Premier League games.

The Red Devils host Aston Villa at Old Trafford on Saturday afternoon as they look to keep their bid for Champions League qualification on track. United are currently fourth in the top-flight table.