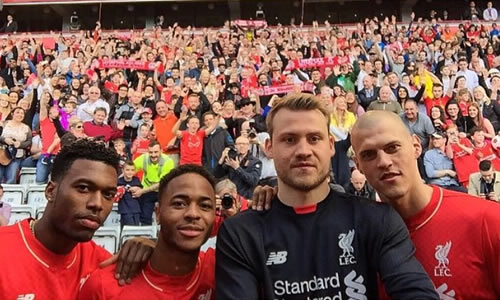 Daniel Sturridge, Raheem Sterling, Simon Mignolet and Martin Skrtel looked in good spirits as they snapped a selfie in front of one of the Anfield stands during Liverpool’s kit launch on Friday.

The Reds unveiled their new home shirt for the 2015-16 campaign, produced by New Balance, on Friday, and the Liverpool stars were on hand to give fans a glimpse of the new kit.

Sturridge uploaded the photo above of himself with his three team-mates onto his Instagram account and wrote: “Fan selfie with the boys…”

Liverpool are next in action when they take on Newcastle United at Anfield in the Premier League on Monday night.

Stats show only one European team ahead of Arsenal in 2015

Jose Mourinho: Why Chelsea’s Eden Hazard must win player of the year