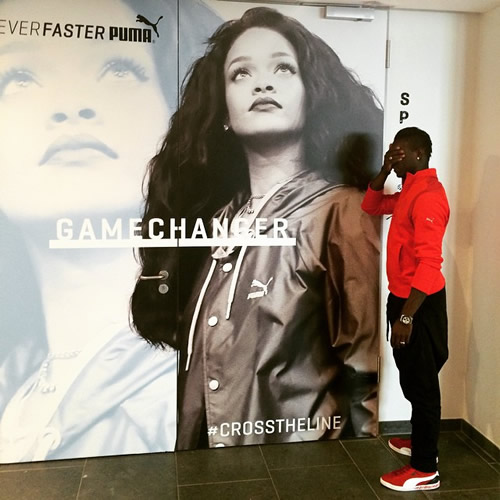 Mario Balotelli took to social media on Tuesday afternoon to send a message to Rihanna as he posed with a larger-than-life version of the popstar.

The Liverpool striker looked distraught as he stood next to a promotional Puma poster featuring the singer and covered his eyes.

The Italy forward, who featured as Liverpool slumped to a disappointing 2-1 defeat by Aston Villa in the semi-finals of the FA Cup on Sunday, posted the picture above on his Instagram account and wrote: “@puma @badgalriri where are you? Lol”

Balotelli has endured a frustrating first season at Liverpool since joining the Merseyside outfit from AC Milan in a £16m deal last summer.

The forward has only scored one Premier League goal in 14 games for Brendan Rodgers’ men so far this season.

He has struggled due to illness and injury in recent years and has largely failed to hold down a regular spot in Liverpool’s first-team.

Liverpool travel to West Brom in the Premier League on Saturday.