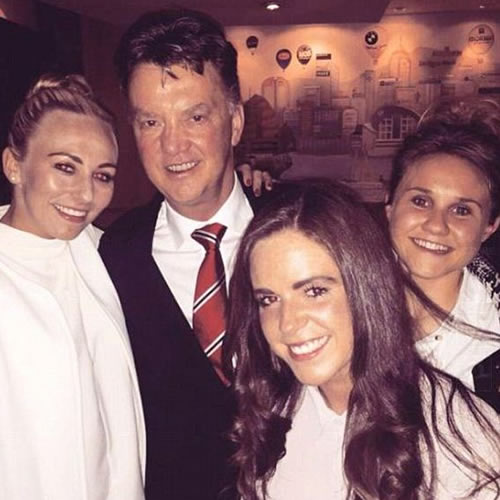 Two members of the Manchester City ladies team sparked controversy on social media this weekend after snapping a picture with Manchester United boss Louis van Gaal in the wake of the Red Devils’ 4-2 derby win at Old Trafford.

Toni Duggan and Isobel Christiansen – and Everton’s Michelle Hinnigan – were pictured all smiles with the Manchester United manager at Cantonese restaurant Wings, just hours after Van Gaal’s men sealed a thumping victory over their neighbours.

City winger Duggan – probably unwisely – uploaded the photo above onto her Instagram account and wrote: “Heyyy Louis van G!!!!! Nice to share a wings with you…… @izzyChristiansen @michellehinnigan”

The post was met with some outrage from City fans on the photo-sharing app, and Duggan has since deleted the photo from her account.

United’s impressive victory over their neighbours moved them to within one point of second-placed Arsenal heading into the final six games of the season.

Defending champions City, meanwhile, are fourth in the Premier League table and four points behind Van Gaal’s United side.