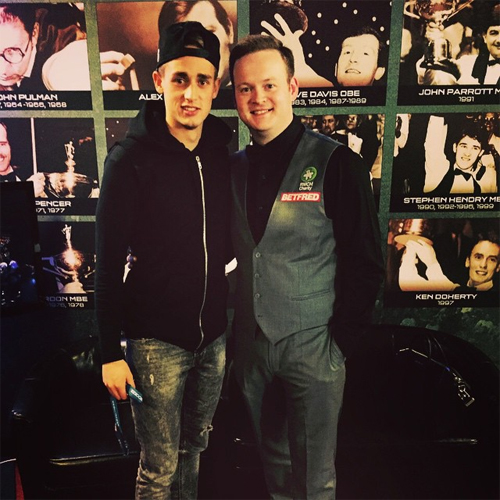 Adnan Januzaj treated himself to a trip to the Crucible Theatre to watch the World Snooker Championships on Wednesday.

The Manchester United winger, who has plenty of work to do if he plans to hit 147 goals in his football career, has struggled to have an impact under manager Louis van Gaal this season.

And the Belgium international may have been getting tips from former world snooker champion Shaun Murphy to improve his finish after the pair met up in Sheffield.

Januzaj posted the above photo and wrote on Instagram: “Great to watch the snooker today and see my good friend Shaun Murphy win!”

The United winger has failed to score or make an assist in 17 Premier League appearances for the 20-time English champions this season.

The promising United forward was an unused substitute in their 3-0 defeat by Everton at Goodison Park.