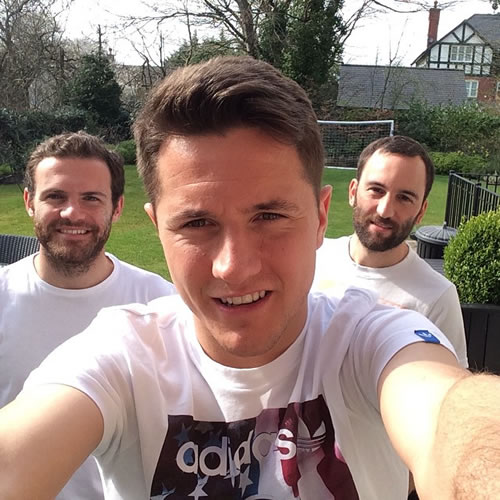 Ander Herrera and Juan Mata were all smiles as they posed for a selfie in the Manchester sunshine on Wednesday afternoon.

The two Spaniards have been in fine form for the Red Devils in recent weeks and have scored four goals between them in their last two outings for Louis van Gaal’s men.

Herrera scored twice as United ran out 3-1 winners over Aston Villa at Old Trafford on Saturday, with Mata setting up his second goal.

And Mata’s brilliant display inspired United to a 2-1 win at Anfield in their other most recent Premier League outing last month.

The pair have clearly struck up an understanding both on and off the pitch, and Herrera uploaded the photo above onto his Instagram account on Wednesday and wrote: “Nice day in Manchester.”

Both Herrera and Mata will be hoping to feature when Manchester United host local rivals Manchester City at Old Trafford on Sunday afternoon.

The Red Devils are currently third in the Premier League table.