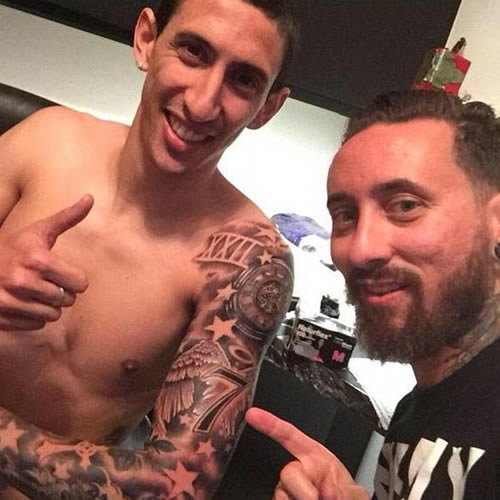 Angel di Maria has hinted that he is happy at Manchester United – by getting a new tattoo featuring the number seven on his left arm.

The Argentina international’s future has been a subject of speculation in recent weeks following a stuttering start to life at Old Trafford since his big-money transfer from Real Madrid last summer.

Di Maria has scored three goals and made 10 assists in 24 Premier League games for United so far this season but has started only 19 of the Red Devils’ 33 top-flight matches.

He has been linked with a potential return to Spain in the summer amid uncertainty about his future, however his new tattoo may indicate that he is planning to stay at Old Trafford.

Di Maria took up the number seven shirt upon his arrival at the English giants – and the Argentine was picture all smiles with his new tattoo prominently displaying a number seven on his left arm.