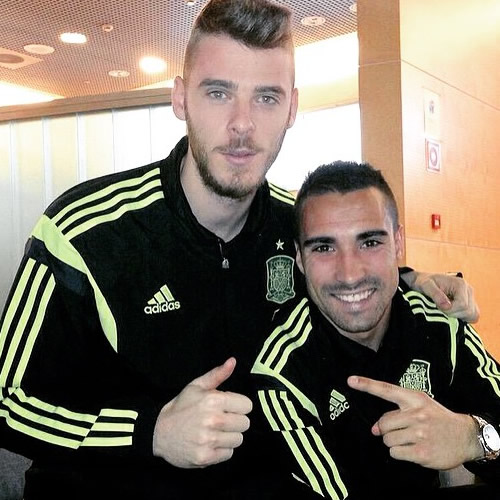 David De Gea took to social media on Thursday afternoon to send his best wishes to Sergio Asenjo after the Villarreal goalkeeper was ruled out of action for six months due to a serious knee injury.

The Spain Under-21 goalkeeper landed awkwardly after jumping for a ball in Wednesday’s 1-0 home defeat by Atletico Madrid.

The goalkeeper suffered a ruptured anterior cruciate ligament in his right knee and will require surgery, which is set to rule him out for around six months.

De Gea was Asenjo’s team-mate at Atletico Madrid before his transfer to Manchester United in 2011.

And the Spanish shot-stopper used his Instagram account to wish his fellow countryman all the best and a speedy recovery.

De Gea posted the picture above of the duo on the photo-sharing app and wrote: “You’ve always stood up and avoided obstacles. I’m sure you’ll make it again. Lots of courage @sergioasenjo1”

De Gea will be expecting to feature when Manchester United host West Bromwich Albion in the Premier League on Saturday afternoon.

Photo: Emre Can wears Liverpool striker’s shirt ahead of derby