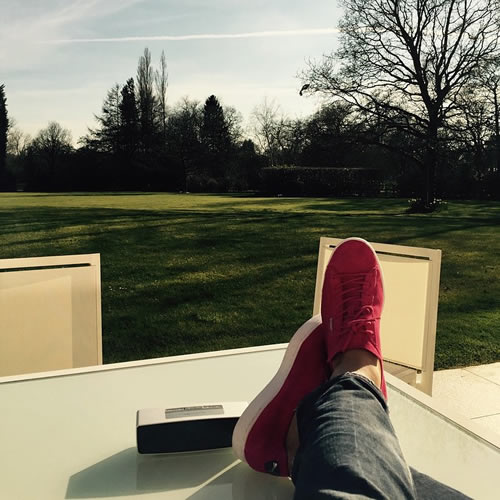 Radamel Falcao took to social media on Easter Monday to post a picture of himself with his feet up enjoying the spring sunshine in England.

The striker’s future at Manchester United has been a source of constant debate in recent weeks following his stuttering form for the Red Devils.

Falcao was a late substitute as Louis van Gaal’s men ran out 3-1 winners over Aston Villa at Old Trafford on Saturday afternoon.

However, rumours about whether the forward will extend his loan spell at Old Trafford continue to circulate, with Falcao only having managed to score four goals in his 20 Premier League appearances.

But Falcao went back to basics on Monday, as he posted the picture above of himself with his feet up on his Instagram account and wrote: “Sometimes we fail to enjoy the small moments.”

Falcao will be hoping to feature when Manchester United return to Premier League action against local rivals Manchester City at Old Trafford next Sunday.

Per Mertesacker thanks Hector Bellerin for ‘stepping up’ at Arsenal

Photo: Arsenal’s Mesut Ozil snuggles up to his dog