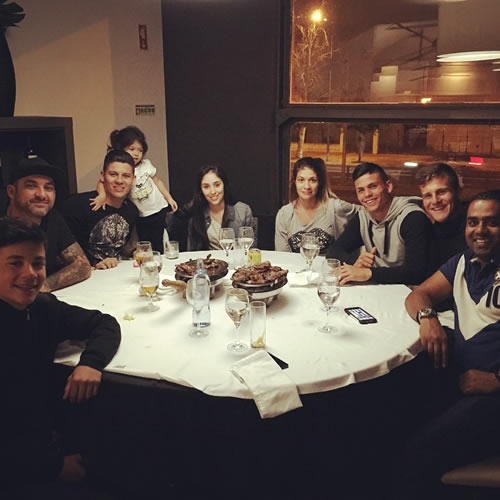 Marcos Rojo has been enjoying some well-earned downtime this week after helping Manchester United secure a 3-1 win over Aston Villa at Old Trafford on Saturday.

The Argentina international played the full 90 minutes as Louis van Gaal’s men sealed victory to move up to third place in the Premier League table heading into the final seven games of the season.

Rojo and his international team-mate Angel di Maria headed to Portugal on Sunday for a quick getaway before United’s Manchester derby clash with City on Sunday.

And the centre-half, who joined United from Sporting Lisbon last summer, posted a picture of himself enjoying a meal on Monday night on his Instagram account.

Rojo shared the photo above and wrote: “Dinner with the family and with good old friends.”

Defending champions City slipped down to fourth place in the Premier League table after a 2-1 loss at Crystal Palace on Monday night.

Gary Neville: Why Arsenal are the favourites to finish second