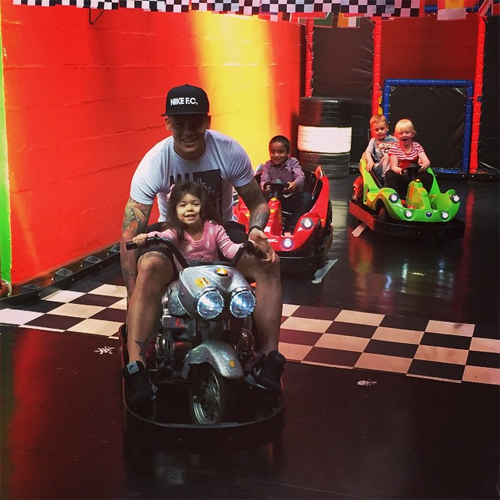 Marcos Rojo took his mind off his injury woes with a spot of go-karting on Saturday afternoon as his Manchester United team-mates prepared to face Chelsea.

The Argentina international won’t feature against the Premier League leaders after Rojo picked up a knock in their 4-2 victory over Manchester City at Old Trafford last Sunday.

Rojo, who moved to United in a £16m deal from Sporting Lisbon last summer, was snapped by his wife Eugenia Lusardo enjoying a spot of bumper karts.

Lusardo posted the above photo and wrote on Instagram: “Fast and furious @marcosrojo #more”

Louis van Gaal has fielded a makeshift back four for the clash against Chelsea, starting full-backs Antonio Valencia and Luke Shaw, whilst Paddy McNair is partnering England international Chris Smalling at centre-half.

Rojo has endured an injury-hit campaign for the 20-time English champions following his summer move, making just 20 appearances in the Premier League.

Photos: The build-up to Arsenal v Reading at Wembley