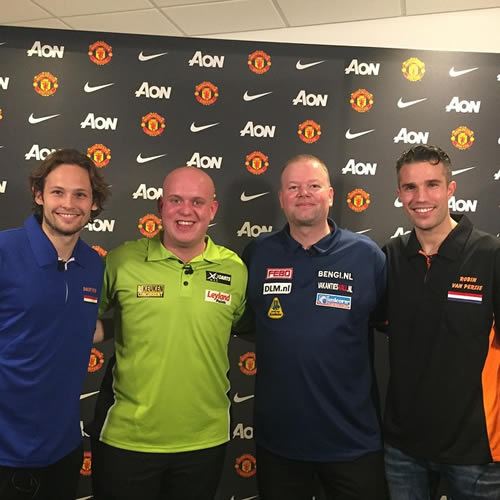 Daley Blind and Robin van Persie were all smiles after playing a game of darts with Raymond van Barneveld and Michael van Gerwen on Wednesday afternoon.

The Dutch darts duo are in Manchester for the ninth leg of the Premier League Darts tournament and visited Old Trafford on Wednesday.

And the pair posed with compatriots Van Persie and Blind after playing a game of darts together. Van Persie uploaded the photo above and wrote: “Really enjoyed a game of darts today with these 2 legends @raybar180 & Michael van Gerwen oh yeh @blinddaley participated as well.”

The Manchester United and darts stars then all enjoyed dinner together.

Manchester United return to Premier League action when they take on Aston Villa at Old Trafford on Saturday afternoon.

The Red Devils are currently fourth in the Premier League table but just a point behind third-placed Arsenal heading into the final eight games of the season.

Photos: Sturridge, Sterling all smiles as Liverpool train ahead of Arsenal trip