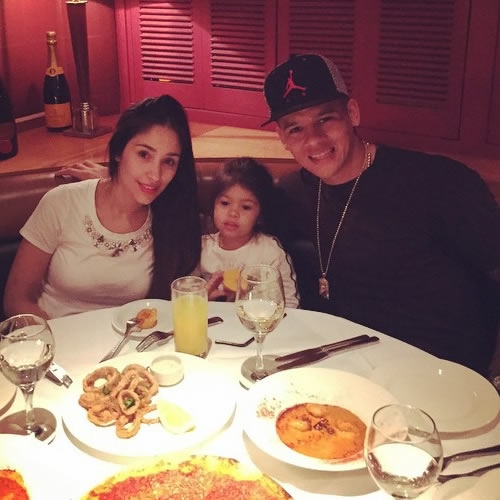 Marcos Rojo with his girlfriend and daughter Photo: Marcos Rojo/Instagram

Marcos Rojo was all smiles as he posed for a picture with his girlfriend and daughter after helping Manchester United thrash Manchester City 4-2 in Sunday’s derby clash.

The Argentina centre-half was a second-half substitute at Old Trafford as Louis van Gaal’s men claimed a thumping victory over their local rivals to keep to within one point of second-placed Arsenal in the Premier League.

And Rojo enjoyed a meal out with his girlfriend Eugenia Lusardo and daughter Morena on Sunday evening.

He shared the photo above on his Instagram account and wrote: “After a great victory, a great dinner with my loves.”

Rojo has made 20 Premier League appearances for United so far this season following his summer transfer to Old Trafford from Sporting Lisbon.

He will be hoping to feature when the Red Devils travel to Stamford Bridge to face Chelsea next weekend.